Freedom—March 4, 2013—Bob Reynolds has been named Ossipee Lake Alliance’s Executive Director. The announcement was made today by David Smith and Susan Marks, who have served as co-executive directors of the non-profit organization since they formed it in 2003. Smith and Marks will remain on the group’s board of directors.

Reynolds joined the Alliance in 2007 and chaired two public forums on the lake’s natural mean high water benchmark, which is the dividing line between state and private ownership of the shoreline. The debate over what became known as the “410 Rule” resulted in a significant victory for lake property owners when the governor signed legislation reducing the benchmark from 410 ft. above sea level to 407.25 ft.

In 2011 Reynolds was named a public member of the State Legislature’s Exotic Aquatic Weeds and Species Committee, whose charter is to study the spread of exotic aquatic species in state waters and advise the Governor and Department of Environmental Services on control and eradication methods. 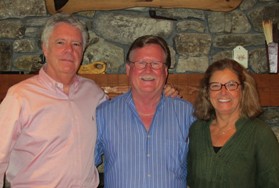 s spent 33 years in the environmental industry as a specialist in the remediation of hazardous waste sites. His consulting company, Spectrum Management Associates, advises companies on government contracts in the environmental and construction markets and has offices in New Hampshire, Florida and Ohio.

“Bob has made a significant contribution to the Ossipee Lake community in a relatively short period of time,” said David Smith, the organization’s co-founder. “He has the vision and skills that the Alliance needs to continue its growth into the next decade, and we are delighted he has agreed to become our new leader.”

Reynolds added, “I’m honored to have the opportunity to help the Alliance facilitate even more involvement by local residents, vacationers, businesses, and government agencies to preserve and enjoy our beautiful lake in sustainable ways for now and the future.”

In making the announcement, Smith also cited Reynolds’ role in the Alliance’s groundbreaking 2011 and 2012 studies showing the state’s share of milfoil control funding has fallen to 11 percent of the total cost. The data also show that half of New Hampshire’s infested lakes have no control plan at all. Smith said the low level of state funding for milfoil control will be one of Reynolds’ main areas of focus as executive director.

Smith and Marks formed Ossipee Lake Alliance in 2003 to connect the lake’s property owner associations, area townspeople, and state and local officials on issues affecting the lake and surrounding waters. The Alliance helped secure the first dedicated town funds to pay for milfoil control costs, and was the first organization in the state to test diving and other non-chemical milfoil removal methods as part of a balanced control plan.

Starting in 2004 the Alliance led a successful five-year grassroots lobbying effort with state officials to stop the damage that unregulated recreation was causing to Ossipee Lake Natural Area. The resulting management plan for the property, announced in 2009, balances preservation and recreation at the site. It is overseen by a coalition of state and local stakeholders and has become a model for similar state-owned properties.