Greetings from the white and slippery slopes of Ossipee Lake. As of 6 pm Sunday, April 13, 2008 it looks like spring may really come this year.

Prior to last Tuesday (the day after April Fool Day) the level had been a steady 406′. Then the warm weather, bright sun and some rain moved in. Snow piles have decreased and there are some large areas of open ground.

The 8′ high pile under my garage roof is down to about 4′. After some shoveling I finally got a path down to the lake and sat in the sun watching a derelict PFD float from south to north in the 10′ wide channel between shore and the ice cap. The day before it had gone from north to south.

It appears that the frost is out where the ground is not covered by snow because the standing water of the last several weeks is gone. Frost heaves have settled out of most roads and I saw a DOT truck without a snow plow. 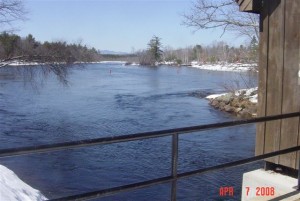 The Ossipee River dam is wide open and thanks to a cooperative effort by the DOT and Dam Bureau a dock section caught on the south end has been removed. This was a small challenge because of the snow plow hump in front of the river bank railing.

All water bodies remain ice covered. Not much open water except in the bay just west of the dam. We had just over an inch of rain Friday night and Saturday morning. This increased flow rate on the Bearcamp, which is a main feed into Ossipee. As usually happens the flow rate decreased substantially the following day (today) and should continue to drop.

With this decrease, reduction in snow cover, frost out of the ground and predicted dry weather there is good reason to expect lake level will top out some time in the next several days. That’s OK with me because the water was high enough Saturday noon to float my docks off the beach. It was fun to put on the hip waders and slop around in the water.