Concord – September 8, 2008 — More loons than ever – 240 pairs – nested in New Hampshire this year. But biologists aren’t cheering. That’s because those pairs are having a hard time reproducing. Of the 125 loon chicks born this season, 95 survived, according to monitoring by the Loon Preservation Committee.

That means the rate of reproduction was about 0.4 chicks per pair, too low to maintain a stable population. Even more worrying is that a total of seven chicks survived on the state’s largest lakes: Umbagog, Winnipesaukee and Squam.

Flooding, predation and human interference all are factors in poor reproduction. But Vogel and his staff think there is something else at work on New Hampshire lakes.

Last winter, the group tested four eggs found on Squam Lake in the summer of 2007. All of them contained relatively new contaminants, chemicals used as flame retardant and stain repellents, that have worried toxicologists in recent years. One egg had extremely high levels, with 10 times the amount of some chemicals than the other eggs, Vogel said. 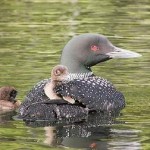 He cautioned that while the egg is enough to raise serious concern, it’s not enough to make a scientific conclusion. For that reason, he didn’t release the numbers on contamination levels.

Four more eggs found this summer have been sent for testing. The Loon Preservation Committee hopes to obtain grants and raise private money to analyze more eggs – at $2,000 each – along with the livers of adult loons found dead. Vogel said he hopes to have a formal report on the findings by next spring.

He said biologists were concerned last summer with low reproductive rates on the large lakes. Only one chick survived on Squam, and none survived on Umbagog, Vogel said.

Five-Year Decline
This year marked the fifth straight year of statewide declines in chick survival. Of the 125 chicks hatched, 95 survived. It was the second worst reproduction rate since the committee started its monitoring in 1975.

The worst was in 1985, when flooding wiped out about half the nests. While flooding was a factor for some nests this year, it wasn’t widespread.

“What were the rest of (the nest failures) due to?” Vogel said. “For many of them, we really don’t know.”

Vogel’s group is looking at several types of contaminants. Some, like polychlorinated biphenyl, or PCB, are no longer being produced but have persisted in the environment. PCBs were used largely as industrial coolants. Their production was banned in 1979.

Others are newer chemicals in widespread use. Perfluorinated compounds are used to repel stains and water. They are often added to the inside of popcorn bags or fast-food containers to keep the paper from getting soggy with grease. Polybrominated diphenyl ethers, or PBDEs, are added to plastics, household items and clothing as flame retardants. Both groups of chemicals are thought to cause developmental problems.

The European Union has taken steps to ban some kinds of PBDE, which has been connected to liver and thyroid toxicity and neurodevelopment problems. The U.S. Environmental Protection Agency has promoted a voluntary phase-out of certain kinds of PBDE. The state of Maine has banned three forms of the chemical. Studies in Europe, Asia, North America and the Arctic have found “traces” of PBDE in human breast milk, fish and aquatic birds, according to the EPA website.

“I look at myself sitting here at the desk: It’s in the computer I’m using,” said Wing Goodale, a senior research biologist with the Biodiversity Research Institute in Gorham, Maine. “It’s in the rug I have my feet on. Also in this chair.”

Goodale’s organization published a study in March looking at contaminants in 23 bird species in Maine, both on the shore and inland. The flame retardants and stain repellants as well as mercury and pesticides were found in each species. Loons had the seventh highest contamination level. Bald eagles had the highest.

Goodale said these newer chemicals don’t bind to the products they are in. They eventually slough off that plastic computer monitor, child’s pajamas or sofa upholstery to which they’ve been added. Humans can carry the contaminants into an ecosystem. The chemical could also be transported by waste incinerators, manufacturers or landfills.

Chemical ‘Soup’
The same tough quality that makes PBDEs useful in manufacturing makes them particularly dangerous in the environment, Goodale said. They don’t break down easily, which means they accumulate in the bodies of organisms that digest them.

Most of the loon eggs Goodale studied contained less of each chemical than the level shown to cause health problems in labs. But, he said, he worries about what happens when a bird’s body contains a “soup” of multiple chemicals. Few studies have looked at the effect of that synergy, he said.

The biodiversity institute’s study offered at least one bit of hope. It compared the levels of PCBs in common eiders and herring gulls on the Isles of Shoals from 1977, before the ban, to those of today and found a sevenfold decrease.

“That’s an indicator that when the chemicals are no longer inputted into the environment in high levels, there will be a response,” Goodale said.

His study looked at six loon eggs from Maine. The Biodiversity Research Institute is analyzing five more eggs now, Goodale said. Both he and Vogel said it will be a challenge to make the jump from determining how much of these contaminants are present in birds to determining their effects.

Goodale said he hopes to work with groups that are already monitoring loon populations, including the Loon Preservation Committee. Vogel said he wants to study the level of contaminants in the fish species on which loons prey. He said it is very difficult to keep the birds in captivity. The same quality that gives them public appeal – their wildness – also makes them difficult to monitor.