[Portions of this story by John Richardson, Portland Press Herald]

Limerick, Maine – September 26, 2008 — Maine Department of Inland Fisheries and Wildlife biologists have retrieved a non-native species of koi from Pickerel Pond in Limerick and have received reports that there may be at least one other in the body of water.

Koi, which is the Japanese term for carp, is an invasive species that can survive and reproduce in local waters and cause devastating harm to the state’s native fish species, aquatic plant life and the quality of water, according to state biologists. Based on public reports, it is believed the koi was introduced into the pond earlier this summer, but it is not known how it got there. 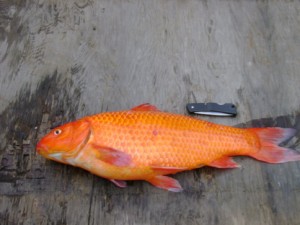 The three-pound koi was captured in mid-September when state fishery biologists deployed an 8-foot electro-fishing boat. Electro-fishing is a process that generates an electric current to temporarily stun nearby fish, allowing them to be netted for identification.

The koi was orange with a black spot on its head and had white-fringed fins. Reports to the biologists suggest there may be a second koi, which is predominantly white in color, and possibly others.

The discovery of koi in the 46-acre pond adds a new headache for property owners and state officials still addressing an infestation of hydrilla, one of North America’s most aggressive invasive non-native plants. After being reported by a resident in 2002, the state found the destructive weed covered 60% of the lake bottom from the shoreline out to a depth of six feet. A likely source of introduction was the transport of fragments on trailers and boats from hydrilla-infested waters in other states.

In cooperation with the town of Limerick and the Maine Department of Transportation, which owns the pond’s only public access, boat access was limited to hours when a boat inspector could be present or by special appointment. Signs were posted urging boaters and fishermen to remove weed fragments from boat props, trailers and fishing tackle, and  a protective outlet screen was installed to catch hydrilla fragments and prevent infestation of the Ossipee River downstream.

The state subsequently treated the weed with herbicides from 2003 through 2005, reducing the hydrilla by 95% and preventing further infestation of neighboring waters.

“We’re very concerned about the illegal introduction of this non-native, destructive species into one of Maine’s lakes and have begun an all-out assault to minimize any harm it may cause,” said Commissioner Roland “Danny” Martin. “Fishing has a nearly $300 million a year economic impact in Maine. Illegal fish introductions not only can ruin native fisheries, but can impact businesses such as stores, camps and restaurants.”