Ossipee — October 13, 2008 — It was 1988 and Ronald Reagan was near the end of his second term as president when Donald Lee began altering the flow of the Lovell River with walls and breakwaters, hoping to create a huge sand bar in front of his house on the big lake. With the 2008 presidential election just weeks away, the results of Lee’s environmental meddling – tons of sand and debris clogging the mouth of the Lovell River and extending far into Ossipee Lake – stand as a stark reminder that 20 years have passed and the Lee case remains unresolved, the damage unremediated. 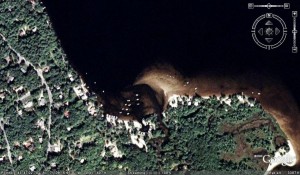 Not that the case is inactive. A legal team was busy this summer pursuing the serial environmental violator – but it wasn’t a team from the State Attorney General’s office. The legal battle has been waged, and continues to be waged by, the Ossipee Bluffs Association, a property owners group that almost single-handedly has kept Lee’s environmental damage from falling off the state’s radar screen.

In a six-page motion to Hillsborough District Superior Court in July, the group’s attorney asked that Lee be slapped with civil penalties of $5,000 per month and that a lien be placed on his property to ensure that he complies with a 2006 state-mandated remediation plan that is expected to cost $850,000. Responding to the contempt motion, Lee’s attorney said he can’t comply with the court order because doing so will cause irreparable damage to the property of a neighboring lakefront property owner heretofore unconnected to the long-running case.

Given that the New Hampshire court system is as clogged as the mouth of the Lovell River, the latest claims and counter-claims make it certain that the case will enter its third decade shortly after we elect a new president in November.

Years of Deception
To those who have followed the case, Lee’s latest actions come as no surprise. Evidence presented at his 2006 Superior Court trial documented how he flummoxed DES officials for years,  ignoring directives to remove the walls, tearing them down before state inspectors arrived and rebuilding them after they left. Finally hauled into court by the Bluffs Association, Lee admitted his actions and was found guilty of violating state environmental laws. The judge ordered him to “forthwith” produce a plan to remediate the damage and pay for it.

Eight months later, he sent DES a two-page document disputing the facts of the case and proposing a clean-up plan with so few details that the office of the State Attorney General was asked to rule on whether it qualified as an application. The Attorney General said it did not.

In September 2007, the first anniversary of the trial, Bluffs attorney Jed Callen went back to court with a motion for contempt, and this April the judge finally ruled, staying the motion and giving Lee another 60 days to comply. Instead of allowing him to pick his own remediation plan, however, the judge picked one for him: the “preferred alternative” plan that environmental experts at the trial agreed was the most logical option.

Exhibit 33C
This time Lee responded quickly, producing an  application that was detailed and filed on time. According to Bluffs attorney Callen, however, the application had nothing to do with the plan mandated by the judge. Whereas the preferred alternative plan required dredging a 700 ft. by 150 ft. channel and removing 25,000 to 30,000 cubic yards of sediment, Lee’s plan proposed dredging 7% of the channel area and removing 1% of the sediment.

By way of explanation, Lee’s attorney, Finis Williams, pointed to Exhibit 33C, one of hundreds of remediation maps and documents submitted into evidence at the trial, and a key part of the preferred alternative plan. By following Exhibit 33C, Williams said, his client would have to tear down the home of abutting property owner James Lamm. Williams charged the Bluffs group with “submitting an improper exhibit,” adding that Attorney Callen had taken “totally inconsistent” positions in explaining the meaning of the document.

The Bluffs motion for contempt is scheduled to be heard in State Superior Court on November 24.