New York – January 14, 2009 – One of the most specialized and useful Model T conversions was the snowmobile kit. Popular across the Snow Belt states, the unusual machines were the creation of Virgil D. White, a Ford dealer in West Ossipee, N.H.

In the early 1910s, White was searching for a way to make the Model T a true all-season vehicle. His solution was to add a second set of rear wheels and caterpillar tracks. White then replaced the front wheels with wooden runners. He called his creation a Snowmobile, a term now used to describe sporty snow vehicles.

White’s shop began selling fully converted Model Ts for $750 and conversion kits for about $400. Eventually, his small factory in West Ossipee was making about 3,000 Snowmobile kits a year. The Model T Snowmobile Club of America (www.modeltfordsnowmobile.com) and its regiona 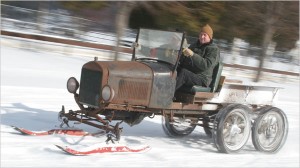 l affiliates hold rallies, where the restored crawlers are as unstoppable as ever. Photo: Hemmings

Mr. Ford’s T: Versatile Mobility
When Henry Ford started to manufacture his groundbreaking Model T on Sept. 27, 1908, he probably never imagined that the spindly little car would remain in production for 19 years. Nor could Ford have foreseen that his company would eventually build more than 15 million Tin Lizzies, making him a billionaire while putting the world on wheels.

But nearly as significant as the Model T’s ubiquity was its knack for performing tasks far beyond basic transportation. As quickly as customers left the dealers’ lot, they began transforming their Ts to suit their specialized needs, assisted by scores of new companies that sprang up to cater exclusively to the world’s most popular car.

Many of these Model T oddities are likely to surface this week at a centennial celebration in Richmond, Ind., hosted by the Model T Ford Club of America. The event is expected to draw nearly 1,000 Model Ts, the largest gathering of the cars since production ended in 1927.

Do-it-yourself magazines ran story after story describing how to modify the T. But some of the most clever and practical conversions came from owners’ sheer ingenuity, with a bit of carpentry and mechanical skill. One Midwestern traveling minister built a tiny church atop his car. He installed a pint-size organ inside and designed the steeple to fold down so the road-going chapel could be garaged.

And the Model T worked on the railroad. Their original wood-spoke wheels replaced with heavy flanged-steel railcar wheels, the Fords served as track-inspection cars and even railyard switcher engines.

No duty was too mundane or extreme for the wildly popular T, which became known by the nickname Flivver. By jacking up the rear and replacing one wheel with a pulley and leather drive belt, owners could turn the Ford into a fine stationary power plant for milling grain or turning the saw blade of a mobile lumber mill.

Even years after its heyday, the T continued as the Swiss Army knife of automobiles. In the 1930s, a group of New England ski enthusiasts created the first tow rope on the slopes of Woodstock, Vt. Their initial power source was a well-worn T equipped with a Pullford tractor conversion, its huge steel drive wheels turning at just the right speed to reel skiers up the mountain.

Even when the original bodies and frames had rusted away, T owners would swap out the nearly unburstable Ford engines and drive axles to power boats, oil derricks and stationary pumps. The car’s do-it-all utility sprang from a combination of stout basic design and widespread availability, said Robert Casey, curator of transportation at The Henry Ford museum and Greenfield Village in Dearborn, Mich., and author of “The Model T: A Centennial History” (Johns Hopkins University Press, 2008).

“First, there were simply more of them than anything else,” Mr. Casey explained. “And the T was cheaper than just about every other car once Ford got production really rolling.” By the mid-1920s, Ford’s mass-production juggernaut at its Highland Park factory near Detroit had reduced the price of a new two-seat Runabout to $240.

Those looking to convert their Fords for uses beyond transportation found the T’s 4-cylinder engine a willing accomplice. Although it produced just 20 horsepower, the rugged 2.9-liter unit didn’t have a lot of weight to haul around. The basic car tipped the scales at about 1,300 pounds, giving it peppy performance.

“The engine was torquey, which made it work pretty well on the farm,” Mr. Casey added.
Indeed, the T often served as a mechanical beast of burden. The car moved capably in tilled soil because Henry Ford and his draftsmen had designed its wagonlike 30 x 3 1/2 inch wheels, high ground clearance and flexible suspension for traversing the rutted dirt roads of rural America.

But in competing with horses and mules pulling heavy disc harrows and grain threshers, the Ford quickly showed its limitations, spurring inventors and entrepreneurs to step in with tractor conversion kits. In his 2004 book, “Ford Farm Tractors,” Randy Leffingwell noted about 125 manufacturers offering tractor conversion kits for the Model T in 1914-30.

Well-known names included American-Ford-A-Tractor, the Adapt-O-Tractor and the Smith Form-A-Tractor (which also made chain-drive kits to turn Model Ts into semi-trucks for road use). Sears & Roebuck and other retailers sold hundreds of kits. “Make your Ford do the work of two or three horses!” shouted ad copy for Pullford’s $135 kit, sold by Montgomery Ward.

One of the most successful makers, the E. G. Staude Manufacturing Company of St. Paul, Minn., produced nearly 30,000 of its Mak-A-Tractor kits for Ford cars. The $225 kit included two large-diameter cleated wheels and different gearing to boost the car’s lugging power (and reduced top speed to 2.5 miles an hour).

Nearly as prolific as the tractor kits were speedster bodies, designed to make the humble Ford look like a Grand Prix car or dirt-track racer. The two-seat speedster body kits were made by at least a dozen specialist companies, including F. M. Ames, Bub and Paco. Stripping off the standard Ford sheet metal and installing a lightweight speedster body further improved the T’s power-to-weight ratio and made performance brisk.

“There haven’t been many automobiles, or even machines in general, which can be made into a race car and a tractor,” Mr. Casey of the Ford museum said.

Today, no single vehicle has to serve as many purposes as the milestone Model T. Perhaps a minivan comes closest to being the do-it-all device, but it would be ill-suited to pulling a disc harrow over a freshly plowed field.