Pinkham Notch — January 18, 2009 — As we huddled in the shelter of a stand of scraggly pines, Paul Cail, my otherwise easygoing climbing guide, took a serious tone. “If the weather is bad up there and we can’t make it to the top, I don’t want any arguing,” he said. “If I say we need to turn back, then we’re turning back.”

Strong and ominous gusts of wind sent treetops whipping every which way. Then, Paul fixed his gaze squarely on my face.

“Hold still,” he said, as he reached toward my nose and plucked a small icicle from my nostrils. Smiling as I winced, he added: “Try and keep that from happening. You don’t want to get frostbite.”

Undaunted, I adjusted my balaclava and stamped the spikes of my crampons into the ice-encrusted snow to make sure they were on good and tight. Together, Paul, Brian Post (a photographer and avid mountaineer) and I strode off, making our way higher and higher along the snowy Tuckerman Ravine Trail, which wends its way through a deep green pine forest and offers glimpses of frosty, windswept peaks. 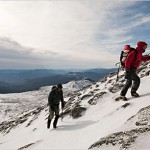 Thousands of hikers make the ascent in warmer months, most often starting, as we did, at the Appalachian Mountain Club’s Pinkham Notch Visitor Center on the east side of Mount Washington. In winter, the four-mile hike to the summit, which gains about 1,000 feet of elevation with each mile, attracts a hardier lot.

But it’s not the height or the steepness of the mountain that impresses most people — it’s the weather. The mountain has a long and infamous reputation: Hurricane-force gusts are typically recorded several times a week in winter, with the winds topping 100 miles an hour at least weekly. In 1934, the Mount Washington Observatory measured the fastest wind speed recorded on the earth’s surface, a stunning 231 m.p.h.

On average, more than 200 inches of snow piles up during the long winter season, from October to May, creating white and wondrous snow-packed slopes.

In many ways, fantastic meteorological happenings aside, trekking up Mount Washington typifies the thrill of any winter hike: a chance to experience familiar settings anew, when forests and rocky slopes are decked out in winter’s dazzling finery, icicles and all.

“To me, the best things about winter hiking is the lack of people and bugs: no crowds, no mosquitoes and no ticks to worry about,” said Penn Burris, who works for the American Alpine Club, in Golden, Colo., in a telephone interview. “There’s a simple purity in all that quiet.”

The day before my attempt to reach the summit of Mount Washington, I was at the Eastern Mountain Sports Climbing School in North Conway, N.H., where I met Peter Nickless and Rob Kippel, two New Yorkers. They had just come off the mountain, after having turned back two-thirds of the way up because of 80-mile-an-hour winds. Instead of being disappointed, though, they seemed energized.

“I have never been out winter hiking before,” said Mr. Nickless, a chiropractor and competitive weight lifter who lives in Queens. “It is definitely a lot more fun. And the weather added a degree of difficulty I could never have expected. We’ll definitely be back.”

Mr. Kippel, who lives in Chester, N.Y., said: “I actually hate the cold. So this was a personal thing to get over. I honestly wasn’t that cold, but the wind was incredible. It blows you around like you’re nothing.”

The two men continued to chat about their experience with their guide, Ethan Lemieux, as they reviewed a dispatch that detailed the day’s weather conditions.

“The intense wind and snow and ice all make for a once-in-a-lifetime experience,” Mr. Lemieux said. “You’re not going to find wind like this even on taller peaks out West.”

Sara Reeder, another guide who manages the school, added, “You’d be surprised how many people come back after a hike with relatively low winds and blue skies who are disappointed.”

As I left with my rented gear — mountaineering snow boots, crampons and an ice ax — I thought about her comment. This being my first major winter trek, I’d be plenty happy to make it up and back in one piece without the mountain’s bullying and bluster.

The next day, when it was my turn to tackle the mountain, it was clear that Mother Nature didn’t care what I thought. I was feeling pretty good after mastering the art of self-arrest in my brief tutorial on how to stop yourself from careering down the mountain with the help of an ice ax. But with a little more than a mile to go, as we crested a hill along a slope called Lion Head, the full power of the wind hit us. It’s hard to convey the extremeness of the fierce, biting wind without cursing. Like rogue waves, unpredictable gusts hit with a mighty wallop.

Head down, I planted the spike of my ice ax in the snow and leaned over, old-man-like, to keep from blowing away. For about 20 minutes, I took steps so small they barely qualified as walking. Then, in the lee of the mountain, just below the cone of the summit, the winds quieted and offered a chance to check out the view. Suddenly, the overcast day had given way to sun and blue sky.

It was around this point that we met three college students from James Madison University in Harrisonburg, Va. The young men, who had left about an hour ahead of us, were returning from the summit and said they were almost forced to turn back by thick fog. But they waited in the shelter of some pines, and when they saw a few hopeful rays of sun peek through the clouds they decided to push on. You could see in their faces that they were elated to be up there, on top of the world. Too cold for small talk, we kept our pleasantries brief and waved each other on.

Even with less wind, there was no giddy dash to the top. When walking on an ice cube, slow, careful steps are the only way to go. At the summit, the wind again roared fast and furious as we made our way to the sign that marks the top of the mountain for a photograph — proof that we’d made it.

Out of the wind, we ate snacks and drank water behind an ice-encased building that houses the Mount Washington Observatory, which is closed to the public in winter. Mr. Cail, saint-like, offered up a few welcome swigs from his Thermos: it held a dreamy mix of warm coffee, hot chocolate and maple syrup.

After spending so much energy, and sweating a lot, staying warm is critical. We pulled on extra fleece jackets or puffy winter coats that we had stowed in our backpacks. Ms. Reeder had told me that one of the biggest mistakes beginning winter hikers tend to make is dressing too warm when they start out.

“They’ll expend a lot of energy hiking too fast and sweat themselves out right away,” she said. “If you get wet and cold, you risk hypothermia. The idea is to be slow and steady throughout the day; taking off and putting on layers as you need them.”

Water-absorbing cotton clothes should be strictly avoided. Faster-drying synthetics or wool blends are crucial to keeping your body warm and dry, she said. I was surprised to learn that even in bitter cold, some hikers opt to trek in only long underwear, adding fleece layers or an outer shell as they go, or only when they stop for breaks.

After our short rest, it was time to descend. Happily, the wind was mostly at our backs and the scenery was just as mesmerizing as it had been on the way up. I learned later that the temperature at the summit that day was 2 degrees, with a wind-chill factor of minus 30. The wind speed had hovered around 60 m.p.h., with gusts pushing near 70. With clear skies, visibility was an eye-popping 110 miles.

That night I fell dead asleep by 10 p.m., with visions of Sir Edmund Hillary in my head.

I woke the next morning to a quiet snowstorm. Perfect for a winter hike in the woods. I decided to try something decidedly mellower. The mostly flat Lost Pond Trail, which leaves from the Pinkham Notch Visitor Center, fit the bill. My hiking companions were Mr. Post, who lives nearby, and his friend Lynne Zummo, a graduate student in earth sciences at Dartmouth College in Hanover, N.H. On her winter break from school, Ms. Zummo had come to the Presidentials to hike and ski.

Gentle, powdery flakes were falling at a pretty good clip when we started. Tufts of evergreen needles were collecting cottony piles of snow.

“This is a great trail because you feel far away from everything, even though it’s only a mile long,” said Ms. Zummo, who has made this trek in every season. On that day, winter’s magic was in full tilt: the well-worn summer path was buried beneath a pristine white covering.

We followed a wide, frigid stream, its edges harboring delicate sheets of ice. Lost Pond was frozen over, and we ventured out to take in the glorious, snow-caked solitude. High above, Mount Washington was obscured by the storm. By the time we made it back to the visitor center it was still early in the day, and snow was still accumulating. In another hour, fresh flakes would fill in our tracks, making the trail ready for some new hikers to relish the untouched path.

If You Go
The Mount Washington hike and the Lost Pond Trail hike leave from the Appalachian Mountain Club’s Pinkham Notch Visitor Center (Route 16, Pinkham’s Grant, N.H.; 603-466-2721; www.outdoors.org) in the White Mountain National Forest. Excellent accommodations are available next door at Joe Dodge Lodge (603-466-2727), where single-night rates start at $67 with dinner and breakfast if you are not a club member.

Eastern Mountain Sports Climbing School sits at 1498 White Mountain Highway in North Conway, N.H. (800-310-4504; www.emsclimb.com). A guided trek up Mount Washington, strongly advised for beginners, starts at $140 a person (for three or more hikers), and includes mountaineering snow boots, crampons and an ice ax. Guides give a hands-on tutorial on how to use your ice ax to keep you from sliding down the mountainside in case you fall. A winter hiking what-to-wear guide can be found at www.emsclimb.com/equipment.html.