Freedom — April 3, 2009 — The Ossipee Lake area came out of winter hibernation this last week. Temperatures have been above freezing day and night with daytime highs near 50. Road load limits of 6 tons were posted on most roads in mid-March. Snow banks on the north side of the Lake Road are almost gone but remain 2–3 feet high on the south side and in most sheltered areas.

I have 7-foot high piles in the parking area – down from 10′ in early March. The frost must be out of most open areas as there is no water in the roadside drain pits.

All lakes and ponds in the area remain ice-covered. The Danforths and Purity lakes have a small amount of water against the shore. The Ossipee Chain has wide areas of open water along the shore due to increase in water level. Most of the early thaw areas are open water.  I checked out the river from the big lake into Broad Bay at noon today and it was ice free with fast moving water. 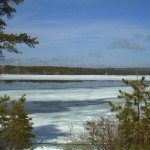 Lake level has been above winter minimum since January but never as high as it is today (408.3′) which is a foot over planned summer level of 407.25. The dam has been wide open since last fall so there is nothing we humans can do to bring the level down.

Friday evening the north end of Broad Bay was 8″ over summer level (about 4″ short of the big lake). We had light rain most of the day and are scheduled for an inch or more in the next 24 hours. If we get this amount in a widespread area the lake could be up another foot by Sunday.

In both years Broad Bay was ice covered but cleared by the end of April.