Ossipee — May 19, 2009 — A lot can happen when people with different points of view get together to work toward a common goal. They can share a fondness for a local beach. They can discuss a state-developed management plan for that beach, one that balances preservation and recreation, thereby pleasing everyone – boaters and environmentalists, local property owners and visitors, state agencies and local municipalities. And they can take an important step toward implementation of the plan by gathering early one morning for a beach cleanup.

On Saturday, May 16, state officials, boaters, and other interested residents met at the Ossipee Lake Natural Area (OLNA) for a spring cleanup. The group raked up, cut up, bagged up, and hauled away a winter’s worth of the typical flotsam and jetsam, both natural (pine needles and downed limbs) and man-made (wrappers, an old tire, and old concrete pilings). 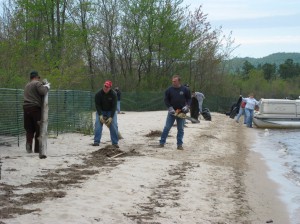 The group also installed signage and a fence. The signs delineate the public-access portion from the closed portion of OLNA, and one pair brackets the haul-out area for kayaks and canoes. Other signs list the rules, which include: carry in/carry out, no bathroom facilities, no boats on shore (except kayaks and canoes), no fires, and no use at night. The fence, in an unobtrusive dark green, closes off the interior of the property from the sandy beach.

Dennis Gould, former president of the Totem Pole Park Association and long-time boating enthusiast, was the moving force behind the cleanup. He had two goals for the morning: tidying the area, creating a “baseline” against which to compare the future condition of the area; during the summer, the area will be inspected periodically and if it holds up well against the baseline, it’s likely that the management plan will proceed as expected and the beach will remain open. If not, the plan might need modification. Gould’s second goal was to promote some good “camaraderie” between the different stakeholders.

Don Kent, administrator of the NH Natural Heritage Bureau, part of the NH Department of Resources and Economic Development (DRED), is the person in charge of the whole project. He’s responsible, in his words, “for getting it done.” Since last September, it’s been his job to finalize and implement the OLNA management plan. He was on hand Saturday, working a rake alongside everyone else, and spoke about the importance of bringing together the different stakeholders.

The State has owned the property since 1969, but started to develop a management plan only in the last few years. Why? According to Kent, it’s a confluence of reasons: an increase in the number of boaters using the area, complaints from area residents, and state-documented damage to the area’s plant life. The time had come; something had to be done.

DRED had temporarily closed the area while a management plan could be drafted. Last fall, Kent established the OLNA Working Group, a 17-member advisory committee comprised of officials from DRED and local municipalities, representatives from the local business community and the boating community,  along with local residents.

The Group’s official objective is to “help the Division of Forests and Lands finalize the OLNA Management Plan, and identify processes and resources to implement the plan.” The draft management plan, dated May 2009, “will balance protection of natural and historical resources while ensuring a clean, safe environment for recreation.” Since its inception, the Group has met four times.

At work alongside Kent on Saturday were other state officials – Bryan Nowell, a ranger with the Division of Forest and Lands, and Melissa Coppola, a naturalist with the natural Heritage Bureau. While Nowell and others were busy with chain saws and rakes, Coppola documented the condition of plants and the natural community.

But it was the boating community that was really out in force that morning. Several owners from Totem Pole dedicated their morning to the cleanup, as did volunteers from Danforth Bay Campground and from Indian Mound. They all wanted to help with the cleanup; acknowledging that there have been complaints over the years about damage to Long Sands, they wanted to help keep the place well-managed so that everyone can use it. As one said, they want “to keep it operational.”

Will the OLNA management plan succeed? It’s too early to tell. The first-ever volunteer cleanup, however, was an unqualified success.

[Cynthia Davis is a contributing reporter]