Ossipee — August 29, 2009 — The owners of 12,000 acres in the Ossipee Mountains have closed the property to the public after users cleared unauthorized trails, in some areas applying herbicide to the land, and posted a map online identifying the new or modified trails.

Chocorua Forestlands, a forest products company, owns the property but the state maintains a conservation easement on it. The land includes Mount Shaw, a popular peak for hikers and part of the ancient volcanic ring that forms the Ossipee Mountains.

Bob Garrison of Henniker, who calls himself the Trail Bandit, published a map of the greater Ossipee area in January online and in hard copy that includes at least one unauthorized trail and private skid roads. It’s unclear whether it was Garrison or others who actually cleared trails on the Chocorua Forestlands property, but the damage is extensive, according to President Jeff Coombs. 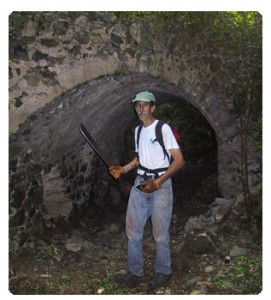 Self-named “Trail Bandit” Bob Garrison (left) in a photo from his website. Garrison has a history of illegal trailblazing in the Virgin Islands, and in a 2007 magazine interview announced his intention to do the same thing in the Ossipee Range.

Coombs said the property has always been open to public recreation but the use got out of hand. He began finding new flagged trails where there weren’t any before. Whole trees and limbs were cut and dragged into the woods. A half-mile of trail about 12 feet wide was treated with herbicide, he said. Seventeen new campfire rings were found on the property.

Coombs said there were beer bottles and litter on the mountaintops. He consulted with the state and posted the property against trespassers in June. The state announced the closure in a press release Thursday.

“We just had to get a handle on what was going on,” Coombs said. “We were forced into this. This is nothing that we wanted to do.”

Garrison, who did not return messages left by phone and e-mail yesterday, has also been notified that he is not permitted on the property, said Chris Gamache, chief of the state Trails Bureau.

Garrison has a website called trailbandit.org and a history of rogue trailblazing. He has mapped St. John of the Virgin Islands and talked in a December 2007 interview with Backpacker magazine about how he used a machete and sometimes herbicide to clear trails in a national park there. When the interviewer asked about his next project, Garrison responded with the Ossipees.

“I was in my plane this past spring and saw a beautiful, open granite ridge begging to be hiked,” he said in the magazine. “A little research with old maps told me there was an old, lost trail there called the Banana Trail. I plan on clearing it.”

The map published this year includes a Banana Trail.

Coombs said the route and lookout along a trail between Mount Shaw and Mount Flagg, called the Gorilla Trail on the map, has been changed. Areas of sensitive habitat on mountaintop lookouts also have been sprayed with herbicide, and the map identifies parking areas where none have been approved by the landowners, he said.

Coombs posted information at the trailheads directing users to get his written permission before using the property.

He also posted an adjacent 1,500 acres that he owns outright against trespassers. He said he is looking into legal action as well. He’s frustrated, and he’s not the only one.

Susan Bryant-Kimball owns 1,200 acres abutting Coombs’s property. She and her husband posted their property in April after finding new trails flagged and seeing their private skid roads on the map. They were open to people using their property but never wanted it marked with trails.

“If you want trails and a kiosk and a map and a description, go to the (White Mountain National Forest),” she said. “If you want to park your pickup by the side of the road and explore, come to our place.”

That was goal before, at least. Now, she said, they’ve put up signs: “No trespassing. Posted due to unauthorized trial marking, clearing and mapping.”

Jasen Stock, executive director of New Hampshire Timberland Owners Association, said members of his organization statewide have been concerned lately about unauthorized use of private property. Just the mapping of the Ossipee properties is concerning, he said. It may be thousands of acres in size, but it’s still private.

“It would be like me walking to your house and taking pictures over the hedge in the backyard and then posting them on the internet,” Stock said. “That’s a real problem.”

The Trails Bureau serves both landowners and the public. But, Gamache said, in this kind of case, it has to back the landowner.

“They are the land base,” he said. “They are the backbone for public recreation and other access in New Hampshire.”

Gamache said people caught trespassing on the Chocorua Forestlands property could be charged with a misdemeanor. Anyone caught clearing trails could be found responsible for the value of the timber or environmental damage. But, he said, enforcing the law could prove difficult on such an expanse of land.