Ossipee – August 26, 2009 — Center Ossipee’s historic Chamberlain Block, consisting of a multi-use commercial building and a grain elevator, will be sold at auction this Saturday at noon at the site, according to ads appearing in local newspapers this week.

The sale is not a foreclosure, according to Ellen Laase, who owns the property with her brother, but is a reaction to the sluggish real estate market caused by the recession. The building, at 4 Moultonville Rd., had been advertised online with an asking price of $265,000.

The ground floor of the building has space for two offices or retail units, and there are four apartments on the second floor. But the property’s most unusual feature is the grain elevator – a five-story post and beam landmark that sits aside the old Boston & Main railroad tracks and sports faded advertising for Purina Chow and Carroll County Land & Lumber Company. 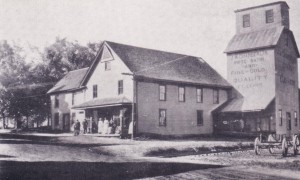 It’s “a big box just waiting for the buyer who thinks outside the box,” according to the seller’s website.

That’s a sentiment echoed by local residents, town officials and the leaders of the Main Street community development program, whose mission is to revitalize Center Ossipee village.

“I do hope whoever buys it can bring some commercial enterprise to town,” said long-time Ossipee Selectman Harry Merrow by email.

Merrow’s memories of the block include having lived in one of the apartments with his parents during the first year of his life. Later, when he was in grammar school, he recalls there were two stores on the ground floor – Hickey’s grocery store on the right side and Abbott’s store on the left side, with an open connection between the two.

“At that time you could get just about everything you needed from one or the other,” he said.

Merrow’s memory of the configuration of the downstairs stores is consistent with the theory that local businessman Joseph W. Chamberlain connected two separate buildings at the site sometime around 1900, with the grain elevator being constructed twelve years later.

The grain elevator – unusual for the area – received grain from train cars and stored it for later sale in Chamberlain’s grain store. According to the seller’s website, some of the original machinery remains in place as well as the bins that held thousands of bushels of grain. 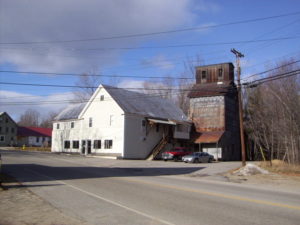 The Chamberlain Block is at the center of what was once the business hub of the area, a village that had a hotel and dining room, grocery stores, a drug store and a movie theatre, among other enterprises. It’s also within walking distance of the Town Hall, post office, library and schools.

Current co-owner Laase, whose family name is Hickey, recalls moving with her parents from Berlin to Center Ossipee to start the grocery store. After it relocated to Indian Mound shopping center, Laase operated a healthcare center at the site for 20 years, closing it in 2005.