Freedom — August 14, 2009 —Ossipee Lake’s fan base is big and getting bigger. At 10:30 p.m. last night, the counter on the lake’s Facebook page flipped from 999 to 1,000, making it the social networking site’s second most popular lake page among New Hampshire’s largest lakes.

What is it about Ossipee Lake?

“We’ve always said the lake and the surrounding area have a hold on people’s hearts and heads like no other place in the state,” Ossipee Lake Alliance co-founder David Smith recently told the Carroll County Independent.

“The growth of the lake’s online community is another example of that.” 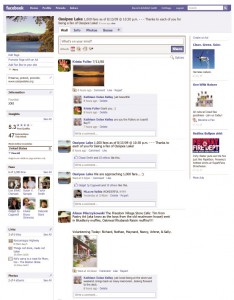 The Facebook page, established by the Alliance in February, had just under 100 fans four months ago when an article appeared in the lake organization’s newsletter. From there, social networking’s well-known multiplier effect took over.

“There have been big jumps ever since,” Smith said, “even this month as people headed out for vacation and started enjoying summery weather after weeks of rain and clouds.”

Smith said the Facebook page has fans from 31 states, Canada, France, Ireland and the U.K., which he attributes in part to the lake’s five youth camps, including popular Camp Huckins on Broad Bay and Camp Cody on the big lake, as well as off-lake sites like Freedom’s Leuthi-Peterson International Camp.

In the April newsletter article, Smith said the purpose of the Facebook page differs from the lake group’s other online efforts even though it has some of the same elements.

“Our website and email news service were designed to distribute news and information while the Facebook page is for anything fans want to talk about.”

Sometimes the two objectives intersect. Since the Alliance published the story of the re-opening of the Freedom Village Store a few weeks ago, a lake fan has posted regular reminders of the store’s hours and pictures of the volunteer staff and the fresh baked goodies they sell there, generating a slew of positive comments – and likely an increase in business.

Smith says some of the Facebook postings are from people who say they vacationed in the area or attended camp years ago and have always wanted to come back.

“Being part of the lake’s online community has the potential to help them decide on a return visit,” he said. “They’ll find the lake is better than ever.”

[The Facebook page is accessible to all at www.facebook.com/ossipeelake. Interacting with the page requires registering with Facebook, which is free.]