The following story is based on news reports from WMUR-TV, the Associated Press and lake residents.

Crews were called to the lake near Nichols Road shortly before 5 a.m. after a car broke through the ice at the mouth of the Bearcamp River and became submerged. 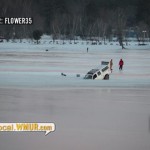 Officials said the driver managed to free himself from the car and get out of the water on his own. He was taken to Huggins Hospital where he is expected to make a full recovery.

Upon finishing that call, authorities said they received a second call shortly after 5:30 a.m. from a man who reported his truck was in 3 feet of water on the big lake.

Lake residents said the vehicle, a white 4×4, is about 150′ ft. from shore near the Broad Bay channel. Officials said everyone inside the truck managed to escape safely from the vehicle.

Officials said they believe those involved were en route to go ice fishing.

Authorities said the car near the Bearcamp River is submerged, and lake residents report the front end of the 4×4 is submerged to the driver’s compartment, with the vehicle’s tail end sticking out of the water.

Dive teams are expected to be brought in to determine how to remove the vehicles from the lake. ﻿