Roland was a Veteran of the US Air Force serving as Staff Sergeant from 1950 to 1954, during the Korean Conflict. He had worked for Cy Moody as a laborer for several years. After his retirement he worked for the New Hampshire Department of Forests and Lands. 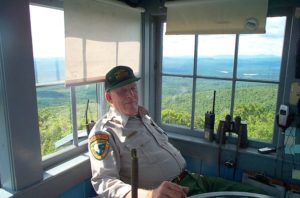 Roland took great pride and enjoyment serving as a Watchman for the Green Mountain Fire Tower for several years. Roland also served as Fire Warden in Ossipee Corner and as a Deputy Fire Chief of the Ossipee Corner Fire Department.

Roland is also survived by a brother, John Libby, Ossipee; and two sisters, Annie Jacobsen, Ossipee, and Thurley Litwhiler, Vestil, N.Y. Roland will also be greatly missed by Michael Bedley, a grandson who was raised by his loving grandparents.

Burial will be in the Water Village Cemetery, Water Village, later in the spring. Donations in his memory may be made to the Tuftonboro United Methodist Church or the Ossipee Corner Fire Department.