Ossipee — April 10, 2010 — Is there anyone in Concord who can explain why the Donald Lee environmental case is still unresolved after 22 years? The federal government has settled product liability lawsuits faster; and there have been so many phases to the Lee proceedings that chapter headings now seem appropriate.

Some of the original participants have died, and others have sold their property after giving up hope that Bradford Cove will ever be restored to the condition it was in before shorefront property owner Donald Lee changed the course of the Lovell River by constructing retaining walls.

Then there’s the $232,000 bill. That’s how much lake residents spent to take Lee to court after waiting 18 years for state officials to hold him accountable – a wait that continues.

On September 27, 2006 a judge found Lee responsible for causing major environmental damage to Ossipee Lake, and he ordered him to ”forthwith” remediate the damage and pay for it.

But the court victory was illusory. More than three years later there is still no remediation plan, and lake residents have had to spend thousands more to keep Lee’s lack of compliance on the court’s radar screen.

Progress in the case has become hypothetical. In January, for example, Superior Court Judge O’Neill issued a new ruling that essentially reiterated his September 27, 2006 ruling. Plus he gave Lee six more months to comply – one of a string of extensions, continuances and delays that have characterized the court’s handling of the case.

The absurdity of the Donald Lee matter reminds us of the movie “Groundhog Day.”

In the popular comedy, Bill Murray plays a TV weatherman forced to relive the same day repeatedly. Each morning the clock radio clicks on and it’s Groundhog Day all over again.

On Ossipee Lake, the calendar is stuck on September 27, 2006. Each morning is a new day but it’s still Groundhog Day; and our punishment is a court order with no bite and state officials with no bark. 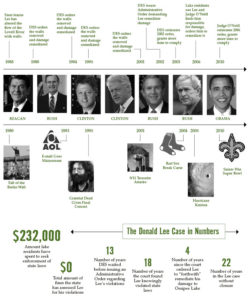