[An editorial by the Carroll County Independent follows this article]

Ossipee – August 19, 2010 — Where was everyone on Saturday? It’s likely many friends and neighbors in Ossipee and Freedom were at the Ossipee Lake Alliance public forum on the so-called “410 Rule” for Ossipee Lake, where more than 200 people jammed the Ossipee Town Hall on a hot and sunny Saturday morning, Aug. 14.

At the forum, state officials said they were open to study and possibly adjust the 410 mark, that they would collect data and tour the lake this fall after the drawdown, and get back to the public by January 2011 with an assessment.

Organizers and participants alike marveled at the heavy turnout, which by some accounts was more than the number that regularly attends town meetings. All 100 of the town hall’s metal folding chairs were filled and it was standing room only for those who hovered on the sidelines or in the rear of the hall. 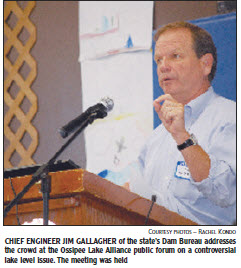 The state owns the water bodies in New Hampshire, and sets a mean high water mark to delineate state from private property. The problem with this little known benchmark, emerged last fall when the NH Department of Environmental Services denied several permits for shorefront property owners to perform shoreline maintenance work, such as repairing septic system.

The 410 rule subsequently created confusion over tax liabilities and whether a property owner had the right to sell the property. 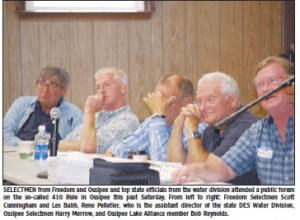 Reynolds, of the Ossipee Lake Alliance, was himself a perfect example of worse case scenario since his entire property lies within the 410-foot line. He said a three feet difference from mean high water mark to a typical water level of 407.25 (the line currently being applied by the state for permit applications) is ” along way up your shoreline.”

“This has also had a chilling affect on real estate sales,” he said, reporting anecdotal information of a 50 percent dip in sales. Buyers may wonder “if I’m buying this property, do I own it or not,” Reynolds said.

He said the towns also collected millions of dollars in shorefront property taxes, which in many towns equals more than half of the tax revenues. Furthermore, he said the state couldn’t seize property without compensation. If the property beneath the 410 line falls within state property it would be untaxed and towns would lose millions of dollars.

“There’s evidence that the 410 line is wrong …we’re all on the same side here. Let’s just fix the issue,” said Reynolds.

Chief Engineer Gallagher concurred that the state is working with residents and officials. He also clarified a major point, that the state is not using the 410 line any longer as the buffer line for shoreline work, but rather the 407.25.

He said the “mean high water mark” for inland waters is the highest line on a water body that is usually delineated by physical features such as shelving visible when the lakes are lowered.

“It’s kind of like a ring around a bathtub.”

Those physical features were used at one time (but it was unclear as to exactly when or why) to set the mark on Ossipee Lake at 410.

A dam installed back in 1878 may have also affected the mean high water mark. Gallagher said during a reconnaissance tour of the lake in the spring, officials did now see a ring, or shelving, at the 410 line.

“The environment has been altered by the dam,” he said. “We’re continuing our investigations.”

He said there is evidence to support the 407.25 line and in the fall, “we’ll look harder.”

“We’re going to have to look at physical evidence,” he said.

Gallagher said by the end of this year, the state should have enough data to make a decision on the line. No doubt, he added, line clouds the ownership issue. However, the state has no interest in seizing property. The land that it does own under the lakes is owned in public trust.

One attendee asked what if any benefit the higher 410 mean high water mark holds for the state.

“None, the state has no incentive whatsoever. The state wants to determine what (the line) is,” replied Gallagher. Later he added, “we’re not here to defend the 410 line – it is what it is. We’ll come up again this fall and come up with a documented decision.”

From the audience, about a dozen residents provided the officials with information, feedback and data on why they thought the 410 line should be lowered. Selectman Merrow added that he’s found some grave and bridge abutments under water – no doubt evidence that the water level has risen over the years.

Several officials expressed a desire to avert a lengthy and costly legal battle over the line. State Rep. McConkey said he was encouraged by the meeting and was concerned for homeowners

“The towns should not have to spend good money to plead their case in the courts,” he said.

However, legislators could submit place-holding legislation this fall in the event that lowering the lake high water mark would require a legislative solution.

Resident Neil Boyle urged the officials “not to take the easy way out.”

“Make the decision to put it back to 400 feet – and don’t throw it back to the courts,” he said, eliciting laughter from the crowd over his “400” foot line.

Assistant Director Pelletier said the information supplied by the towns thus far has been very helpful. He complimented the crowd, and said, “This has been a very accommodating group.”

He assured the public that the department will come out with a decision by January if not sooner. “We want to do the right thing,” he said.

[The following is an editorial by the Carroll County Independent]

Now that was a public forum

The Ossipee Lake Alliance, town and state elected officials, and those from the State’s water division and dam bureau deserve a huge round of applause for pulling off a   successful, very well attended public forum regarding the so-called 410 rule.

More than 200 people attended the forum, held Saturday, Aug. 14 at Ossipee Town Hall. Who would have expected more citizens to show up for a meeting on a beautiful Saturday morning than for a typical Town Meeting?

The issue, in the eyes of shorefront homeowners, are property rights and unfair taxation. Some of the homeowners, like Bob Reynolds of the Ossipee Lake Alliance, own property that lies completely within the state’s 410-foot mean high water benchmark for Ossipee Lake. Reynolds’ home is on stilts.

Ossipee Lake shoreline homeowners argue that the state’s ownership of New  Hampshire lakes sets the mean high water mark at 410 feet, an arbitrary line with no clear cut basis in fact or history.

The public forum was widely publicized in this newspaper and on the Ossipee Lake Alliance web site and e-newsletter, which is distributed to several thousand recipients.

Select board members from Freedom and Ossipee have been actively involved in efforts to lower that mean high water mark several feet so that ownership issues could be resolved and people could buy or sell lakefront property and/or repair septic systems and docks and such without fear that the state owns their property.

Property rights? Taxation without representation? Sounds like issues from the American Revolution. What could have been a tension filled meeting jammed with angry property owners turned out to be a civil exchange of questions, answers and viewpoints between state officials like state Chief Engineer Jim Gallagher of the Dam Bureau and Rene Pelletier, the assistant director of the NH DES Water Division.

Nobody cried, cursed or carried a fiery torch. In the end, state officials set a clear deadline (January 2011) to determine or change that 410 line. They will return this fall after the usual fall dam releases lower the lake levels. Homeowners are invited to participate in providing information and evidence to the state, (contact Ossipee Select Board Chair Harry Merrow).

The meeting was productive. Attendees were civil, polite and articulate. In these days when we attend many sessions where people are just plain mean and angry, the vibe of this forum was refreshing. Now if everyone who attended this session would also show up to the annual town meetings (or remember to get an absentee ballot) that would be marvelous.