Effingham – September 23, 2010 – Effingham this week become the third Ossipee Lake town faced with the task of addressing a milfoil infestation.

DES officials say DNA tests confirm that weeds found along the Effingham shore near the Ossipee River Dam are variable milfoil. Variable milfoil, as opposed to harmless native milfoil, is a fast-growing invasive that cannot be eradicated once it takes root. It is spread by boats whose props chop it into pieces that are dispersed by lake currents, with each tiny fragment capable of starting a new infestation.

Ossipee Lake Alliance officials said the origin of the infestation could have been fragments from Phillips Brook, Leavitt Bay or Portsmouth Cove, or a weed fragment could have fallen from a fishing boat trolling in the immediate area. A kayaker found the weeds this summer and sent samples to DES for testing. 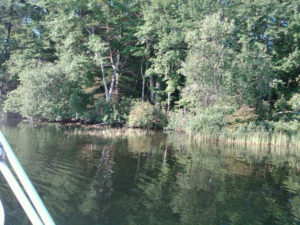 Innocuous looking area is home to Ossipee Lake’s latest milfoil infestation, just above the Ossipee River dam, which is a popular spot for fishing. [Alliance Photo]

The discovery is bad news for Effingham, which has a relatively small footprint on the lake but a sizable presence on the Ossipee River. Because of the location of the infestation, just above the dam where the lake drains into the river, the potential exists for the milfoil to move downstream if it is hit by a boat prop or dislodged by a flood. The infestation is in an area estimated to be about 16 square feet in dimension.

While the state owns the lake, adjacent towns are responsible for controlling milfoil once it is found. To date, more than $150,000 has been spent to control milfoil in Freedom and Ossipee and the state has covered just 15% of the cost, according to Alliance figures.

Alliance officials said they have reached out to Effingham’s Select Board to help.

“Effingham has not had to deal with this problem before and we can advise them on how to create a management plan, which the state will require,” said Alliance Co-Executive Director Susan Marks.

“Given the water currents in the infestation area, the top priority will be to prevent milfoil from spreading downstream to the Ossipee River. That will require an aggressive control plan that can be implemented quickly.”

A small milfoil infestation in the Ossipee River along Freedom shores near the Effingham Falls Bridge has been managed with benthic barriers – large mats that prevent growth – since 2004. Marks said mats were a workable solution since the infestation is in relatively shallow water. It is the only confirmed patch of milfoil in the river, although a recent comment posted on the Ossipee Lake Alliance website by a river resident claims there is more milfoil further downstream. The report has not been verified, however.

Effingham participated in meetings hosted by the Alliance early this year to form a Tri-Town Milfoil Committee to improve communication and coordination of milfoil control efforts between the three lake towns. The Committee was disbanded, however, after Effingham’s representative dropped out of the meetings.

The Alliance’s Marks said “We continue to believe that inter-town coordination and cooperation are essential for long-term success in controlling milfoil in our area. The milfoil challenge is going to be with us for a long time.”