Ossipee—September 1, 2015—Missing signs, cut fences, garbage, and human feces are evidence of trespassing and vandalism at the Short Sands section of Ossipee Lake Natural Area, according to state authorities.

Trespassers at the site also destroyed plants by pulling them out of the sand. Whether the destroyed plants are among the rare and threatened species that make the Natural Area unique will be determined by a state survey to be conducted in the fall.

This is the second time Short Sands has been vandalized this summer. Damage reported in June—including a cut fence and missing signs and posts—was repaired by DRED rangers on July 17. Less than two weeks later the fence was cut again and the posts and signs were reported missing.

Short Sands, a section of the Natural Area that is closed to the public, has for several years been the focus of a group of boaters who want the state to open it for public use. The state has rejected their request as inconsistent with its goal of preserving the site’s unique environment. 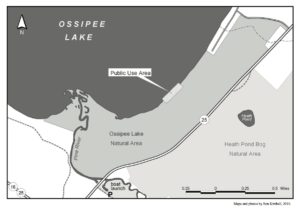 009 management plan for the Natural Area divides the property into an area that can sustain low impact recreation, and closes the rest in order to protect the rare plants and natural communities that live there, primarily along the shore.

In reporting this summer’s vandalism, state official Sabrina Stanwood, who heads DRED’s Natural Heritage Bureau, said there has been a reduction this year in the resources available to enforce the Natural Area’s regulations.

“This puts a greater burden on the Forest Ranger assigned in that region,” she said in an email as part of her report on the situation.

Once the site of all-night parties and rampant destruction of property, Ossipee Lake Natural Area began to recover after the state formed a “Working Group” of diverse interests that brought together previously competing state agencies and forged an alliance between leaders of the boating community and local environmental organizations.

The Working Group helped the state hammer out the document that became the property’s first management plan since the land was purchased from developers in 1969. It was also the first such plan to attempt to balance the competing interests of preservation and recreation at an environmentally sensitive state property.

Since it was implemented, the plan has relied heavily on self-enforcement of the site rules by boaters who have used education, communication, and gentle persuasion to obtain compliance. In instances when gentle persuasion has failed, Marine Patrol officers have issued citations and made arrests.

More about Ossipee Lake Natural Area may be found here.