Freedom—July 18, 2016—In a letter to Ossipee planning and zoning officials last week, Ossipee Lake Alliance asked the town to require the developers of Westward Shores to provide additional data about flooding before ruling on the merits of the owner’s plan to double the number of campsites and expand to an adjacent residential property known as the Peninsula.

The request comes in the wake of a Conway Daily Sun article in which Zachery Bossenbroek, CEO of the campground’s parent company, Northgate Ossipee LLC, said flooding concerns were “way overblown” and that “significant floods” on the lake had effectively stopped after state officials addressed the “mismanagement” of the Ossipee River Dam in 1999.

In a public letter to area newspapers, Alliance officials Susan Marks and David Smith called Bossenbroek’s statements wrong. Their letter quotes state officials who say the lake will always be prone to flooding because six rivers empty into it and the dam is the only outlet. The channels connecting the big lake to the bays impede water flow and cause back-ups that flood low-lying properties like Westward Shores, the writers explained.

At recent public hearings about the expansion, environmentalists and other members of the public vocalized concerns that floods could disrupt the campground’s septic system, dislodge RVs and buildings, and severely test evacuation plans. In its letter, the Alliance pointed to state data showing there have been numerous severe floods in recent years, including in 2005, 2006, 2007, 2010, and 2011. 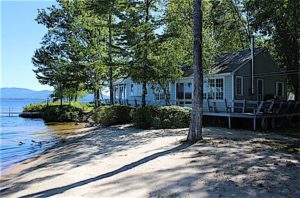 A photo from a real estate website shows the lake level at the Peninsula, which the owners of Westward Shores hope to incorporate as part of its camping complex. Concerns have been raised about the potential for flooding at the site.

“Even with the dam gates wide open, the lake can flood either at a nuisance level or in a destructive way,” said Alliance official Smith. “Since Westward Shores is on the floodplain, it is one of the areas most vulnerable to this naturally occurring phenomenon, making high water an important issue.”

But lake residents who track water levels as a hobby say low-lying areas are flooded at even lower levels. The state has never identified a specific level at which the lake is considered “flooded,” and it’s unclear from information made public through the expansion application process at what water level Westward Shores and the Peninsula are breached by water or how often the property has had to be evacuated in the past.

The minutes of the March 8 Planning Board meeting show SFC Engineering provided the town with DES data listing a number of instances when the lake exceeded 411 ft. in recent years, but the minutes don’t indicate why SFC picked that benchmark.

“The engineers have told the town they understand that flooding must be taken into account in the application process, but it’s a concern to have the owner of the property saying flooding is no longer a problem. That kind of disconnect makes it difficult for the public to understand the flooding issue and have confidence in the process.” 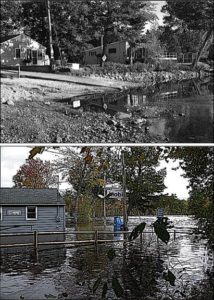 Lakefront Landing Campground & Marina, directly south of Westward Shores, is shown during the early drawdown of 2005 and several days later after a major rain event. The luck of an early drawdown prevented a recurrence of as much damage as in 1998.

Revised High Water Mark Revealed
The highest recorded water on the big lake has long been reported as June 1998 when the state’s Bearcamp River gauge tracked an uptick from the natural mean high water mark of 407.25 to 412.63. But in an email to the Alliance last week, DES said its gauge stopped functioning at that level and “missed the peak,” which it said was more than a foot higher—413.72. That benchmark was recorded at Westward Shores using “a surveyed high water mark,” according to the state.

Westward Shores was evacuated during that flood and also during one in August 1990 when the beach and portions of the campground were “completely washed out,” according to a newspaper account in the Nashua Telegraph.

Likely the worst flood in modern times was in April 1953, when the water level at the dam was 413.0. While there is no state record of the level at the Bearcamp River or Westward Shores during that event, state models suggest the big lake level was likely 414.

Better Understanding the Risks
In their letter to town officials, the Alliance officers said a more precise report on the historical extent of flooding at Westward Shores, including the number of evacuations, should not be difficult to compile, and the incremental data would provide another reference point for town officials and the public to understand the flooding challenge beyond looking at theoretical benchmarks for 100-year floods, 50-year floods, and the like.

They said topographical maps, the Dam Bureau’s archive of water level data, and basic modeling can pinpoint the level at which the lake invades the campground and the Peninsula, and that level can be matched against the state’s water level database to show how often flooding has occurred and when evacuations were required. They said the number of times Westward Shores has flooded, and the extent of that flooding, are useful metrics that everyone should understand before the project is voted up or down.

“The past obviously can’t completely predict the future,” the Alliance’s Smith said, “but it can provide important context as officials and the public evaluate the developers’ assurances that the septic system won’t be compromised, RVs won’t float away, and evacuating double the historical number of campers from the site won’t be a problem when Mother Nature challenges the lake. It’s just common sense to have this information.”

The next Ossipee Planning Board meeting is on Tuesday July 19 from 7-9 p.m. in Ossipee Town Hall. 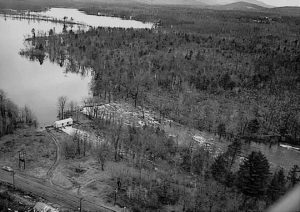 The Ossipee River Dam and Berry Bay during the 1953 flood, during which the water level on the big lake is estimated to have been 414, almost 7 feet above the natural mean high water mark. The lake system funnels all water to this single outlet.