Ossipee—July 14, 2016—The planning board here is expected to vote July 19 whether or not to allow the Westward Shores Campground expansion. On July 5 people from across the region got to weigh in on the applica­tion at a planning board hearing that attracted about 65 people. There were com­ments about the impact the expansion could have on the lake water quality, economic im­pact, and safety, but the focus was mainly on the expansion onto the pen­insula. That expansion includes just 15 of the proposed 246 new sites. The campground, locat­ed off Route 16 on New­man Drew Road in West Ossipee currently has 258 sites.

Earlier this week, this reporter paid a visit to the campground. Staff accommodated a request via golf cart ride out to the peninsula. We made our way along a one-car-width paved roadway to the two-acre parcel. The parcel was purchased by Northgate Ossipee, LLC in December 2015 for $525,000 from Reynolds Living Trust and it in­cludes a three-bedroom house that has been re­modeled, a dock, and spectacular views of the mountains and lake. That house is currently listed for rental (at homeaway.com) at a $396 average nightly rate and sleeps 11 people.

If the proposed expansion plan gets all of the necessary town, state, and federal permits, the first phase of the plan will include adding up to 15 pre-built cottages on blocks to this two-acre site as well as moving the leach field 1,000 feet back from the lake. Northgate has already received a special excep­tion to the road width requirement. Normally, a 24-foot wide roadway would need to be con­structed to provide ac­cess to the area. After receiving the blessing of the fire chief, the zon­ing board of adjustment agreed to only require the road be widened by eight feet to a completed 16-foot width with cut­outs for vehicles to turn around.

Northgate also re­ceived a Shoreland Per­mit from NH Depart­ment of Environmental Services in May to “de­velop existing peninsula area to include 18 sea­sonal campsites as part of the larger Westward Shores Campground ex­pansion. Total impact is: 13,630 square feet”. The permit granted the applicant permission also to locate the camp­sites 20 feet from the water. Based, it appears, on p 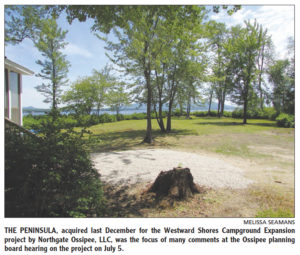 ublic and land use board concerns, the plan has been scaled back to include 15 sites and they will be located 50 feet from the water.

North­gate has also filed an ap­plication to NH DES for a dredge and fill permit, minor impact, to accom­modate power lines and expansion of the road­way to the peninsula (2,460 square feet of per­manent wetland impact). That application was granted an extension to July 24 for the applicant to provide further infor­mation. The status of all wetlands and shoreland impact applications can be found at NH DES web­site at http://www2.des.state.nh.us/OneStop/Wetland_Permits_Que­ry.aspx.

Ossipee resident and business owner Joe Deighan spoke on be­half of the application and suggested that some on the planning board are just digging in their heels and are opposed to the project – a claim at least four board mem­bers denied at the hear­ing. Deighan pointed to the “phenomenal job” that Northgate’s engi­neering firm did with the Danforth Bay camp­ground project in Free­dom and that Ossipee should expect that same level with the Westward Shores project.

He also said Ossipee should be encouraging economic development like this and not putting up barriers. He ques­tioned why the planning board has added another layer by voting prior to the opening of the pub­lic hearing to contract with Jones and Beach Engineers of Stratham to complete a review of the application. That firm said it can have the review done and a report complete by the board’s next meeting, July 19 at a cost of up to $4,500 that will be charged to Northgate.

“The project is larger than any of us can fully assess,” said planning board member Robert Gillette.

After listening to the many public comments, planning board mem­ber Bruce Parsons of­fered a “compromise”. He said to silence those concerned about the en­vironmental impact, the developer could cancel plans to expand out onto the peninsula, to silence those concerned about safety the board could require an evacuation plan, and to silence the rest, the board could require Northgate put even more of their prop­erty into conservation easement. Already being worked on because of a request by the town’s conservation commis­sion, Northgate is work­ing on granting a con­servation easement of 45 acres to New England Forestry Foundation.

Dan Fischbein of Eff­ingham spoke about the expansion’s potential impact on the already overcrowded Ossipee Lake. “We are all here to protect our greatest asset, which is Ossipee Lake. We grew up on the lake, we enjoy the lake. But I don’t know if you people have gone down to the lake on Monday after a busy weekend – it smells like dead fish – there are too many people out there – more boats more traffic,” said Fischbein.

Blair Folts, executive director of Green Moun­tain Conservation Com­mission in Effingham said routine lake water testing in the Westward Shores area has shown elevated levels of phos­phorous. The level, she said should be about 7 but has been as high as 100. Ossipee resident Sam Martin countered this saying that the health of the lake is a multi-town problem and more should be done to focus on the “old, old” cottages that have gray water from washing ma­chines going right into the lake and outdated septic systems.

Planning board mem­ber Roy Barron seemed most concerned about safety on the peninsula with the road expansion. “You’ve got people out there walking and rid­ing bicycles and vehicles and it’s a safety issue in my mind,” said Barron. When planning board chairman Ski Kwiat­kowski pointed out that the fire chief had signed off on the plan, Barron added, “I disagree with the fire chief. It’s up to us to decide whether it’s safe or not. That don’t meet BOCA code. Some­body gets hit out there and killed because we approved that are you going to feel good about that later because some­body was speeding? If they put speed bumps every ten feet, then it might work. But it ain’t going to work otherwise because people aren’t going to slow down. If a kid gets hurt some­body’s going to get sued over that.”

According to campground staff, vehicle traffic in the campground is actually discouraged and visitors are instead encouraged to rent one of the many available golf carts.

The hearing was continued to Tuesday, July 19.