Effingham—August 18, 2016—For most organized recreational opportunities, families here travel to other towns so Effingham youth can participate. In the summer, the library here offers a reading program, the local church a weeklong vacation bible school, and the elementary school has a traditional summer school program. For 22 years, Effingham youth (nearly one-third of the elementary school’s total population every year) had the option of entering a lottery for one of the coveted scholarships to Camp Marist summer camp. The scholarship program ended with the 2014 season when a court agreement expired and Effingham selectmen decided the camp does not qualify as a charitable organization.

The two sides have made attempts at mediation but those talks have shut down. The matter is now set to be heard in Carroll County Superior Court in a bench trial Oct. 18.

The Marist Brothers filed paperwork with the town in March 2015 asking for a charitable exemption. Non-profit organizations that own property in New Hampshire are required to file this paperwork annually to keep from paying property taxes. In its 2015 filing, Marist asked for exemption under state law, N.H. RSA 72:23 V that they believe qualifies them for the exemption and states, “the buildings, lands and personal property of charitable organizations and societies organized, incorporated, or legally doing business in this state, owned, used and occupied by them directly for the purposes for which they are established, provided that none of the income or profits thereof is used for any other purpose than the purpose for which they are established.”

The exemption application was denied by selectmen who, in their letter of denial, stated says stated that the camp’s purposes were unduly broad, its programs were not sufficiently different from those offered by for-profit youth camps, and the volume of scholarships provided to families in need was “unremarkable.”

The year-old case closely resembles the Marist fight back in 1990 when the selectmen at that time denied their request for charitable exemption and the case went to the N.H. Board of Tax and Land Appeals (BTLA) and Marist lost. They appealed to Carroll County Superior Court and from that, the agreement to pay a gradually increasing portion of their property taxes over the 20 years was granted along with the PILOT (payment in lieu of taxes) that traded camper scholarships to Effingham children for a portion of the taxes owed. 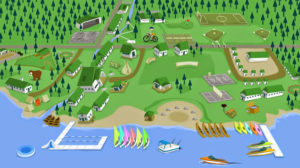 The town is represented by Matthew Serge of the Manchester law firm Drummond Woodsum and MacMahon. In court documents, Serge states that Camp Marist is located “on the shores of Highland Lake in Effingham. The land upon which the camp is situated is considered by many to be one of the most valuable properties along the lake.”

The camp is actually located on 159 acres on Ossipee Lake. The sprawling property was purchased in 1950 from Sadie Fritz for $65,000. According to Marist court documents, the U.S. Province of The Marist Brothers of the Schools has founded and or staffed and funded educational ministries open to youth of all faiths throughout the United States including Massachusetts, New York, Florida, Texas, Illinois, New Jersey and New Hampshire.

They wished to create a summer camp that complemented its work in the schools so formed the non-profit Marist Brothers of New Hampshire and purchased the Effingham property. The mission of the camp is “aimed at advancing the educational, religious, and spiritual development of youth.”

Marist is asking the court to agree with their position that they are exempt from property taxation based on their non-profit status and charitable status. Represented by Jonathan Block of the law firm Pierce Atwood LLP of Portland, Maine, the camp is also asking the town to refund any overpaid property taxes plus interest, attorney costs and all fees related to the case.