Freedom—October 13, 2016—Ossipee Lake is prone to floods, ranging from major events that send boats and docks down the Ossipee River, to smaller events that chip away at the shoreline and float whatever has been left on the beach, such as a pair of water skis, a kayak, or a can of gas.

Flooding is a particular concern on the big lake, which has some of the area’s lowest lying properties. As a result, flooding is an important part of the debate about the plan to add 246 new RV rental sites at Westward Shores Campground and Marina, a business that is located entirely on the floodplain.

Last week, Freedom’s town leaders, who have abutter status because the expansion has regional impact, asked the Ossipee Planning Board to reconsider its conditional approval of the plan. At the time of Ossipee’s approval, Freedom was denied a request for additional time to review new documents in the case so it could present the reasons it believes water quality could be compromised by the expansion.

“Our concern about this project is the potential impact it may have on water quality,” Freedom’s letter to Ossipee officials states. “We have this concern because the entire project is in the 100-year flood plain. As a downstream town, the impact from a flood could be significant.”

Jones & Beach, the engineering firm hired by the Ossipee Planning Board to conduct an independent assessment of the expansion, wrote in a July report that it shares the concerns expressed “by the public and some members of the Planning Board” that the entire business is in the Ossipee Lake floodplain.

Some of the public’s concerns about flooding stem from conflicting statements that Westward Shores officials and their advisors have made about it. In June the campground’s CEO told a reporter that flooding has not been an issue since the state began managing the dam in 1999. In the same article, however, the campground’s engineering consulting firm said flooding is a known issue that the developer understands must be addressed.

While Ossipee officials quickly turned down Freedom’s request to reconsider its decision to allow the expansion to move forward, the developer must also meet state and federal requirements, which means flooding is still a key part of the discussion. Given the importance of the topic, we took a deeper look at why Ossipee Lake floods and how often it does so.

The Bowl Effect
A floodplain is an area of low-lying ground adjacent to a river. It’s formed mainly of river sediments and is subject to flooding. In the case of the Westward Shores floodplain, the adjacent river is the Bearcamp, the largest of Ossipee Lake’s tributaries. 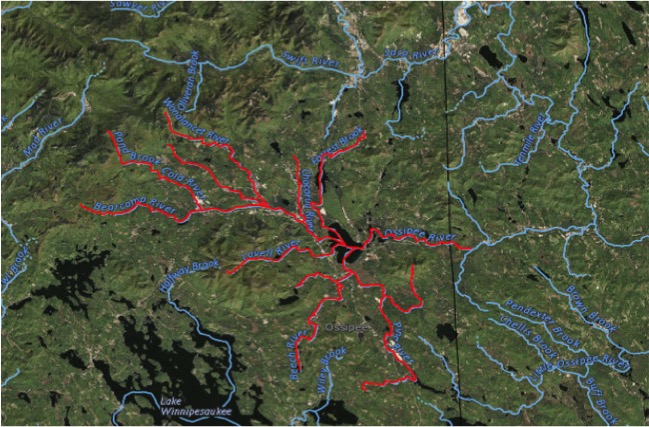 A U.S. Geological Survey “streamer” map shows how rivers and streams feed into Ossipee Lake’s four main tributaries and then empty into the lake, at center, on the way to the dam. The largest tributary, Bearcamp River, enters the lake next to Westward Shores Campground & Marina. Credit: USGA

The Bearcamp begins as a spring in Sandwich Notch and flows through Sandwich, Tamworth, and West Ossipee before emptying into Ossipee Lake. What ends up in the lake, however, is more than spring water from the hills of Sandwich. Eight other rivers feed into the Bearcamp, including the Chocorua River, Cold River, Mill Brook, and the Wonalancet.

The U.S. Geological Service’s “streamer” maps validate what most people already know: our area has abundant water in the form of lakes, ponds, rivers, and streams. When there is heavy rain or significant snow melt or both, the waters feeding the Bearcamp build up force and head for Ossipee Lake to empty at Westward Shores.

But the Bearcamp is just one of four major tributaries emptying into the lake. There’s also Pine River, West Branch, and Lovell River, all of which have their own set of waters feeding into them. Additionally, smaller streams and brooks, named and unnamed, pump water into the lake from the surrounding area.

As a result, the Ossipee Lake system is a kind of bowl fed by water seeking a path to the ocean through the lake’s only outlet, the Ossipee River Dam. To get to the dam, water has to pass not only through the big lake, Broad Bay, Leavitt Bay, and Berry Bay, but also through the three channels connecting them. The bays and channels act as natural bottlenecks, slowing the flow of water and causing the lake to rise.

Mother Nature vs. Dam Management
The State Dam Bureau has a water level gauge on the Bearcamp next to Westward Shores, and another at the dam on the Effingham-Freedom border. By tinkering with the flow of water through the dam’s sluiceways, the state can adjust the lake level up and down, maintaining it at the mean high water mark of 407.25′ during boating season and lowering it by 3 ft. or more for the winter.

But sometimes even a modern dam structure and the best management practices are no match for Mother Nature. For people in the lake’s low-lying areas, rising water begs the questions: how high and how long. At Westward Shores, the question is whether the lake will rise to 410′, the level at which water invades the property according to engineering maps obtained from state and town sources.

Flooding Frequency Data
Since the state began managing the dam in 1999 there have been many improvements to the facility, and dam management has become more consistent and refined. But that hasn’t eliminated the flooding of low-lying properties like Westward Shores.

To determine how frequently flooding occurs at the campground, we obtained the State Dam Bureau’s database of water levels going back to 1983, the earliest year for which there are official records. 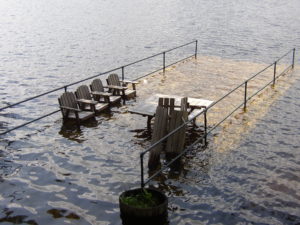 High water on Berry Bay swamps a dock in April 2007. In addition to major damaging floods, such as those in 1953, 1998 and 2005, nuisance floods that linger for days are common on Ossipee Lake, creating hazards by sending personal property and debris out into the lake. Alliance Photo

Spring rains combined with snowmelt typically make April a good bet for high water, but flooding can occur in any month, even December. Major rainstorms in June 1998 resulted in a destructive flood that forced the emergency evacuation of Westward Shores and other low-lying properties.

During that flood, the state’s water gauge hit 412.63′ before it stopped working. Dam officials subsequently used a recorded high water mark at Westward Shores to establish that the peak level of the event was 413.72’—more than 6 ft. higher than the lake’s normal level. The flood caused serious property damage around the lake.

An even bigger flood would have occurred in October 2005 had the state not started its winter drawdown after Labor Day, instead of Columbus Day, to allow property owners to work on their shoreline.

After reaching a winter-like low of 403.84′ on October 8, more than 11 inches of rain fell and took the level to 411.3′, flooding low-lying properties including Westward Shores. If not for the early drawdown, the water level could have reached 414.75′, exceeding the level of the damaging 1998 flood. 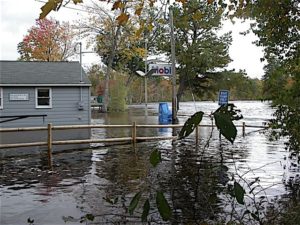 Lakefront Landing Marina, at the southern end of the big lake, during the October 2005 flood when the water level reached 411.30′. If the state had not drawn down the lake early that year, the level likely would have reached 414.75, exceeding the disastrous 1998 flood. Alliance Photo

Mother Nature Dictates
The state’s database makes clear that Ossipee Lake is prone to flooding, and because of the bowl effect it always will be. According to FEMA, Westward Shores annually has a 1% chance of being flooded at the 414 ft. level and a 10% annual chance of flooding at the 412.2′ level—levels that can result in serious property damage. Historical records and current weather trends suggest that these probabilities may be conservative.

Even so, it is legal to build or expand on a floodplain, and campgrounds are a permitted use provided that the business complies with federal, state, and local regulations that guard against damage to the environment caused by floods. 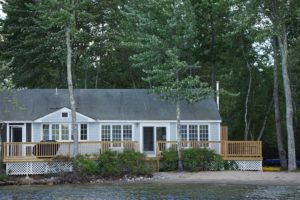 Westward Shores is planning 15 new year-round units on the low-lying property known as the Peninsula. The picture above, showing the property when the lake is at the managed level of 407.25′, illustrates the Peninsula’s vulnerability to flooding. Alliance Photo

The fragile Ossipee Aquifer, which supplies much of the area’s drinking water, is at the center of concerns about the expansion’s potential harm to water quality. Since the adjacent Bearcamp River Delta provides an important recharge to the aquifer, a primary fear for many is the affect to the aquifer and surface waters if a flood breeches the campground’s septic system and its connections to RVs.

FEMA guidelines require that RVs be connected at the site by “quick disconnect” utilities and security devices. But, as the Freedom Selectmen pointed out in their appeal, “in approving [the expansion] the board did not discuss quick disconnect electrical or water connections.” In fact, the approval placed no conditions on Westward Shores to meet FEMA regulations even though they had agreed in writing to accept that as a condition of approval.

Other regulatory issues that Freedom believes were not fully addressed include whether campground units are Recreational Vehicles or Manufactured Homes, which are treated differently in the town’s zoning ordinance, and whether the Peninsula’s soil types can meet FEMA guidelines and Ossipee’s zoning ordinance requirements in regard to the 15 year-round units planned for the site.

In addition to the discussion about regulations, a letter sent to Ossipee’s Planning Board last month provides a helpful common sense perspective. The sender was the Saco River Corridor Commission, which was created by the State of Maine and operates downriver from Ossipee Lake to protect lands adjacent to rivers, including overseeing development up to 1,000 feet into the floodplain.

In its letter, the Commission reminded Ossipee’s planners that the purpose of floodplains is to act as floodwater storage areas, buffering the countryside against the ravages of water when it exceeds the bank that normally holds it in.

In regard to the Westward Shores issue, the Commission said “Placing manufactured homes, septic systems and other facilities on these areas simply makes no sense.”

“As regulators of land use we are constantly told that if only a little common sense would be allowed in the equation there would be no need for so many regulations. We hope that the many issues surrounding the placement of this campground would give pause for concern for water quality, for destruction of property, and the potential for threats to public health and safety.”