Freedom—November 27, 2016—A public fundraising campaign approved by the Freedom Select Board will begin this week to help the town pay the legal costs of appealing the expansion of Westward Shores Campground. The fund is called the Ossipee Lake Protection Fund, and contributions to it are tax deductible.

Freedom Planning Board Chair Anne Cunningham and Conservation Commission Chair Paul Elie obtained the Select Board’s approval for the fund after telling town officials they had lined up more than $8,500 in pledges from around the area in just a few days of making calls.

Cunningham said checks to the fund should be made out to the Town of Freedom, with a notation in the memo line stating “Ossipee Lake Protection Fund.” Checks should be sent to P.O. Box 227, Freedom, N.H. 03836.

The legal dispute between the two towns stems from the Ossipee Planning Board’s September 20 approval of the Westward Shores expansion before Freedom could present its case that the development threatens water quality. Freedom has abutter status in the matter because the expansion has regional impact.

Freedom appealed the Planning Board’s approval, but the appeal was denied. The Conservation Commission of Effingham, which also has abutter status, then joined Freedom in appealing to the Ossipee Zoning Board of Adjustment. They argued to the ZBA that the Ossipee Planning Board’s approval violated Ossipee’s zoning laws. The ZBA dismissed the appeal, and the matter will now shift to Superior Court. 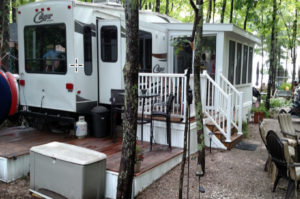 Floodplain Regulations
The case that the expansion is a potential threat to water quality is rooted in the fact that the campground is entirely on the floodplain. Campgrounds on floodplains are a permitted use in Ossipee’s Zoning Ordinance, but they are regulated by FEMA requirements and the town’s Floodplain Development Ordinance, both of which seek to minimize environmental damage in floods.

One of the ways the regulations do that is through mandated elevation and security requirements. Park trailers, travel trailers, camping cabins, RVs and all similar units that are on the campground property for more than 180 consecutive days annually must either be “fully licensed and ready for highway use” or else be elevated on a permanent foundation above the base flood level, which at Westward Shores is four feet higher than the property’s base elevation. Units must also be securely anchored to resist flotation, collapse, and lateral movement.

Freedom’s appeal contends that Ossipee’s Planning Board should have made compliance with the elevation and security requirements a condition of its approval. It notes that many of the existing units in the campground appear to be year-round, with attached physical structures including carports, wooden decks and three-season rooms that “for all practical purposes have transformed them into permanent structures.”

The appeal also focuses on a portion of the property known as the Peninsula, where the developer wants to install 15 year-round RV units. Although the applicant has agreed to raise and anchor these units, Freedom says the Ossipee Planning Board should have made compliance with the anchoring requirement a legal condition of its approval, given that the site contains “poorly drained alluvial soils that will likely present challenges to effective structure anchoring,” according to the court document

Also in regard to the soils on the Peninsula, Freedom says the Planning Board approved the construction of a septic system to service the RV units despite the presence of two poorly drained soil types that the Ossipee Ordinance expressly prohibits for septic system use. The presence of those soil types was noted by the developer in its expansion application.

The Superior Court filing may be read here.