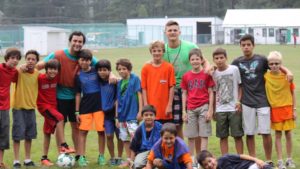 Campers at Camp Marist on Leavitt Bay. The camp has lost a tax fight with the Town of Effingham.

Effingham—February 16, 2017—A superior court judge has ruled that a summer camp here is not eligible for a charitable tax exemption. In an order handed down January 30, Carroll County Superior Court Judge Amy Ignatius wrote that Marist Brothers of New Hampshire (MBNH) that operates Camp Marist on the shores of Ossipee Lake failed to meet its burden of proof that it qualifies for tax exemption.

The Marist Brothers filed paperwork with the town in March 2015 asking for a charitable exemption. Non-profit organizations that own property in New Hampshire are required to file this paperwork annually to keep from paying property taxes. In its 2015 filing, Marist asked for exemption under state law, N.H. RSA 72:23 V, that they believe qualifies them for the exemption and states, “the buildings, lands and personal property of charitable organizations and societies organized, incorporated, or legally doing business in this state, owned, used and occupied by them directly for the purposes for which they are established, provided that none of the income or profits thereof is used for any other purpose than the purpose for which they are established.”

The exemption application was denied by selectmen who, in their letter of denial, stated that the camp’s purposes were unduly broad, its programs were not sufficiently different from those offered by for-profit youth camps, and the volume of scholarships provided to families in need was “unremarkable.”

When mediation between the two sides broke down, MBNH filed the superior court appeal and a two-day bench trial was held in October 2016.

Details of the camp operations and its finances were brought out at trial. The mission of the Camp is to “work with youth to spread the gospel message to youth.” The Camp incorporates religious rituals and activities into the camp experience and there is a priest on campus. Although it is a Catholic camp, there are no religious qualifications for attendance.

The Camp operates seven weeks each summer at a cost to campers ranging from $1,900 for a two-week session to $5,900 for the whole season. In addition, campers pay additional fees for most extra activities and for field trips. In 2015, the Camp provided 47 full or partial scholarships out of the 490 campers that attended in 2015. Relatives of Camp staff or of the Marist Brothers are allowed to attend camp for free and 50 to 60 do so every year.

When considering the appeal, Judge Ignatius looked to the N.H. Supreme Court case Elder-Trust of Florida versus Town of Epsom. That 2007 case set forth four factors that a property owner seeking charitable tax exemption must meet. First, the organization has to be established and operate as a charity. Second, an obligation exists to perform the organization’s stated purpose to the public rather than solely to its members or limited class of persons.

Third, the land must be occupied by the charity and used directly for the charity’s purpose. And lastly, the organization’s income or profits cannot be used for any purpose other than the purpose for which the charity was established. The charity’s officers and members cannot receive any profit or benefit from the charity.

The Camp failed part one of the test in that its mission is to further education and religion but provides neither to the public. The Court found that the Camp “is actually administered, mostly, if not entirely, for the benefit of a limited group of children, rather than for the benefit of the general public.”

And while a charity does not necessarily “have to serve the poor or the needy in order to qualify for the charitable exemption,” its services have to be accessible to a “large and indefinite class of beneficiaries,” so a charity that limits its service to those who are financially well off does not meet the test. Because Camp Marist benefits a limited class of youth rather than the general public and provides no services to the community it fails part two of the exemption test.

In 2015, the Camp received $92,584 in revenue from renting all or a portion of the 159-acre site during the other 45 weeks of the year when camp was not in session. The court heard no testimony that those funds were used to directly offset the cost of operating the Camp. And so, it failed to meet the third exemption factor.

Finally, the Camp failed to meet the fourth factor in that it uses a portion of its income and profits for purposes outside its mission of “advancing education” and “aiding religion.” Profits are deposited into a general fund and used to support all Marist ministries in the United States when needed, provide health insurance to active and retired Brothers, and to support the living expenses of retired Brothers. Camp Marist revenues exceeded expenses by $107,907 in 2015.

Marist Brothers attorney Jonathan Block of the law firm Pierce Atwood LLP of Portland, Maine said his client is disappointed with the decision and are filing a motion for reconsideration in Carroll County Superior Court.