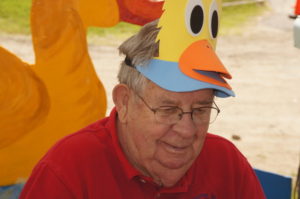 Howard Bouve at Rubber Ducky Day, one of his many volunteer activities in Freedom. He served on our board for more than 12 years.

Freedom—February 23, 2017—Howard Bouve passed away on Saturday, February 18. He is survived by Sylvia, his wife of 60 years, their four children, Sarah, Elizabeth, Tad, and Amy, and nine grandchildren.

Howie was a banker by career and a volunteer by nature. He and Sylvia and the children lived for many years in Lynnfield, Mass., where he worked for First National Bank of Boston and retired as a First Vice President in 1990.

In retirement, Freedom became his home. He and Sylvia moved permanently to the house they had built on the big lake, a stone’s throw from Calumet. From this roomy outpost Howie would sail, entertain friends, and host his children and a growing number of grandchildren.

Retired he may have been, but inactive he was not. He was honored in last year’s Town Report for more than 20 years of service as a member and alternate on the ZBA, and for his work as an election worker and assistant moderator.

He was very active with the First Christian Church of Freedom, helped out with water quality monitoring on the lake, and directed the Friends of the Library. He worked on the Old Home Week Committee for many years, and loved the ritual of Rubber Ducky Day, annually providing the energy to help make it a success.

When we asked him to join our board in 2004 we didn’t have high expectations that he would have time for another organization. So we were pleasantly surprised when he said yes. Just as we were delighted when he agreed to stay on, year after year.

For the Alliance, Howie offered a realistic perspective on how to prioritize our work. Periodically he would remind us that not everything is possible, and progress should be measured over the long haul, not just on what took place last week. That was the banker in him.

The volunteer in him, however, was always ready to mix it up and rattle some cages, if that’s what was needed. He didn’t shy away from issues, and when there was work to be done, he was hands-on and full speed ahead.

Howie took obvious delight in hosting our summer board meetings for many years, and at the end of the official business we would break for small talk and coffee on his deck. Sitting with him there, looking out over the lake and beyond to Green Mountain, there was no doubt Freedom was his true home.

A memorial service will be held at the First Christian Church of Freedom at 1 p.m. this Saturday, February 25. Donations may be made to the church in his memory.