Tamworth–March 2, 2017–In the early winter months, I often search for migrating waterfowl swimming about on the shallow ponds around Sandwich. The glacier split, went around and over those terrain features over there, and created waterbodies that are excellent for various migrants to use. These lowland ponds and marshes of today indicate where the glacier once moved through. Note this along Route 25 while you drive over higher ground and abundant wetlands.

I am thrilled to see small ducks that wouldn’t be present here for the rest of the year, because they usually nest well to the north of us during the breeding season. They are only passing through to warmer climes for overwintering, then later return. Such a species is the lesser scaup, or “bluebill.” Of course, there is a greater scaup, too, but it seems to head right for saltwater, so we don’t see it much in these parts. That helps in identification, at least, that is my thinking; one can always be wrong when it comes to ducks. These two are rarely together, so never mind. 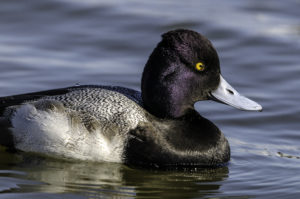 Both of these two ducks are stocky, with distinctive black-and-whiteness, culminating in a dark head that seems iridescent green-black to purple, and is glossy. The lesser scaup’s yellow eyes are striking, as is the light, pale-blue bill in front of the peaked crown. This duck has a steeper forehead than the greater scaup species, and for some reason, this personally enhances his “cuteness” as a smaller diving duck from my perspective.

His simple, artistic plumage is as graceful a statement as any duck can make–elegant in its basic design. If you ever see one up close, say in a zoo’s duck pond, where other native birds are also stopping by, you may marvel at this utter simplicity that is beautiful in its own right. There is breathtaking beauty here that stuns for no other reason. The gray back has vermiculations from its topside, merging into the white flanks. The breast and tail are all black.

The lesser scaup is about 16 inches long and can be seen cruising around our marshy coves of lakes and ponds, hunting for mollusks underwater. It dives easily and frequently–while it hunts for its food on the bottom. This little duck is one of the last waterfowl to leave its breeding territories, having only raised its young in July. They are not a-wing until the fall. The majority of lesser scaup migrate through the Central and Mississippi Flyways to wintering areas along the Gulf of Mexico and coastal Florida. Fresh and brackish water wetlands and open bays are preferred wintering habitats. In season, my duck hunting friends shoot at them in Louisiana.

Most lesser scaups breed well to the west of here in northern Canada, mostly below Alaska. Lesser scaup have one of the most extensive breeding ranges of North American ducks. Their breeding range extends from the northern United States through the Prairie Pothole Region, to the Bering Sea, with the largest breeding populations occurring in the boreal forests of Canada.

This duck probably first breeds at an age of 2 years in most cases. Elements of courtship display by male include a shake of that peaked head, followed by throwing this glossy head far back and bringing it forward very quickly; exaggerated bowing movements; ritualized preening. Some displays may be performed underwater. The lesser scaup’s nest site is usually on dry land close to water, often on islands in lakes, surrounded by good cover of vegetation. The species typically breed near interior lakes, ponds and sedge meadows. Deeper, more permanent wetlands are preferred. Lesser scaup prefer wetland habitats with emergent vegetation, such as bulrushes, since they often harbor abundant populations of aquatic insect larvae. These little scaup ducks dive to feed on seeds of pondweeds, wigeon grass, wild rice, sedges, and bulrushes. They also feed on crustaceans, mollusks, aquatic insects, and small fish. Lesser scaup forage mainly by sifting through the bottom mud, usually after diving and swimming underwater, occasionally by dabbling without diving.

Females nest in close proximity to open water and lay an average of 9 eggs. The nest is a slight depression with addition of some dry grass, lined with down. Ducklings leave the nest shortly after hatching and go directly to water. Youngsters are tended by the female but feed themselves. Two or more broods of young may join under care of several adult females. Age at first flight is 47-54 days after their hatching.

As lesser scaups are divers, they can be very active when feeding. These scaups, like other ducks, form new pair bonds each year. They are one of the latest North American ducks to pair, with most pairs forming late in spring migration. They are gregarious throughout the year, with the exception of the laying and incubation period.