Tamworth–March 22, 2017–The saw-whet owl is the smallest we have in the northeast, being a chunky eight-inches long. As the owl nesting season begins in earnest at this time of year, we may hear it at dusk sending piping notes out from a coniferous swamp. There, in dank, low, wet areas, comes forth its odd sounding mating call. The loud, rapid series of toots sounds like an old time cross-cut saw being sharpened by a whetstone, giving this species its peculiar name. Our ancestors producing a winter’s supply of firewood probably knew more of that “Too-too-too-too!” sound than we now do, but that is what best describes this tone.

We may remark upon this unusual, monotonous sound as it spikes the late winter night with its metallic series of notes. The saw-whet’s clear peeps drift eerily across the night air, making you wonder what that odd sound could be. Without knowing what to make of it, we let the dog back in the house, and close the sliding glass doors without thinking further about the origin of these curious whistled notes coming from the low-lying part of our property.  Most of us will never encounter the little saw-whet other than this unusual moment of hearing it resonate in this manner. 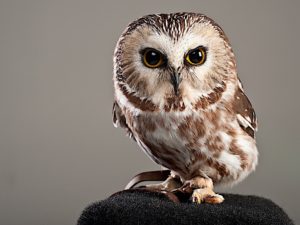 Saw-whets live in those coniferous swamps and hunt unsuspecting wood mice that come out from underneath the snow at night, which are their principal food. The owls often utilize the cover of a balsam fir’s branches, and just reside there throughout the daytime, dull and sleepy, waiting for their rodent prey to reveal themselves in the dark hours. Then they drop down and animatedly catch their meal. Like all owls, they are fearless in their quest, and the little saw-whet will even courageously take on a rat, and consume him. This tiny forest denizen will kill and devour squirrels, too.

Quite a few surveyors discover this diminutive owl, as they slice through a densely needled branch or two with a Sandvik brush-axe, and find the owl sitting unperturbed on whatever is left of the stem, close by the interior trunk of the tree. They’ll often comment that the small saw-whet doesn’t move, even after the sharp swipe of the Sandvik revealed it! “There he was! Sitting right there–looking back at me!” is quite the common exclamation when viewing this owl in the wild with his retiring disposition.

A northern saw-whet owl will commonly remain in place like this, staring at the interloping human from bright yellow eyes in the large, reddish-brown round head, which is flattened on top. There are no ear tufts, but the striking field mark is its remarkable, whitish streak on the forehead, like a large, pale “Y” smeared across the eyebrow area. In some birds, this is more pronounced than others. A heavy coating of loose downy feathers helps fight the extreme cold of its boreal haunts.

Saw-whets are notorious for their uncommon tameness and can be closely approached, and even occasionally caught by hand. But because of their winter roosting habits in wooded swamps, much is still unknown about this reticent little owl that is so hard to locate, except accidentally.

A few years back, I had the treat of one visiting my feeding station at my residence on the Bearcamp River. I saw him land close to the shelf I had installed below the hanging feeders just outside the window, and then resolutely settle in for a while. The round muffin of an owl remained hunched at the edge of the screened-surface platform feeder-shelf, and kept looking down. I thought it interesting that he knew seed-eating rodents would utilize this feeding station, and he was ready for them. It became darker, as I silently left him to his task.

He was as round as a coconut, all body and head, and compressed down. This owl was small, even tiny—no bigger than a jumbo-sized coffee mug.  He wasn’t moving, and I knew him to be no threat to any birds needing the “meaties” at the feeders—he was there for mice. The owl looked occasionally down at the snow-covered ground, and peered there for any rodents that might be coming out to eat the scattered sunflower seed on the deep snow’s surface.  There were none, so he hunkered down some more, becoming almost motionless.

I have stated this owl is exceedingly tame around humans, and he was certainly proving that fact. His back was now to me; he had almost no tail. I took note of his brown streaking, and markings from his head back over his shoulders and posterior while studying him. I watched him finally move away on broad wings, having had no foraging success. Cold is not a problem for saw-whets, but they may sometimes hunt in barns if desperate for mice.

Dave Eastman also broadcasts “Country Ecology” four times weekly over WMWV 93.5 fm. As Vice President of the Lakes Region Chapter/ASNH, he welcomes you to monthly programs at the Loon Center in Moultonborough. He is available at: cebirdman@yahoo.com (or) www.countryecology.com for consultation. This article was also published by the Conway Daily Sun.