The following article was written Warren P. Balgooyen and edited by the Maine Department of Environmental Protection. It appeared on the website The Heart of New England.

Portland—March 28, 201—Ever been on the shore of a lake or river when the ice went out? It is a fascinating experience, both to see and to hear.

Ice-out begins in late winter as the sun becomes stronger and starts to melt the ice. Weakening ice can be heard to “groan” as the wind buckles it. As the ice melts, its structure changes and it forms pencil-like crystals arranged vertically through the ice mass. The ice becomes crystallized or “honey combed”. If you are lucky enough to be nearby a lake or river the day of ice out, you may hear a “tinkling” sound. The pencil-like ice crystals fall against each other like dominoes when the waves of open water nibble at the ice edge, creating that special sound. 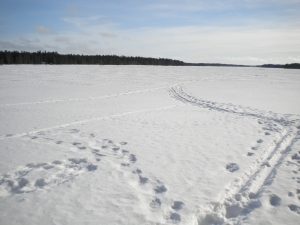 Any weedy areas and rocks, logs, or any other solid objects in the water will absorb the sun’s rays and heat up the water around it. Even a leaf blown out onto the ice will melt its way downward in the ice. Often a band of open water develops along shorelines before the ice weakens over the deeper, middle part of a lake.

After ice out, the surface water warms to 39°F or 4° C. This is the temperature at which water is most dense (heaviest) so the heavier water sinks to the bottom. This process is called spring turnover. Now the water can freely mix, with the help of wind and currents. Turnover is an important event. The mixing water carries up nutrients (food) from bottom sediments to the surface. The bottom sediment is filled with nutrients and when that nutrient-rich water floats to the surface in fall and spring, it carries up nutrients to the algae and other plant life as part of the food web.

The mixing also brings oxygen down into the bottom waters. This replenishment is vital to the fish that live deep in the lake. As the temperature warms, all the living organisms that have been dormant in the lake come to life and start growing again. Frogs, turtles, crayfish, snails, and larval insects, which spent the winter dug into the mud, now rouse themselves and start swimming.

Open water also brings our spring visitors, such as loons and migrating waterfowl headed for northern breeding grounds. Spring overturn also happens to be the best time for spring fishing because the mixed uniform water, now filled with oxygen, brings trout and other fish up from their deep winter retreat. They can be found at any depth at this season.

Ice out is a time of quiet on the lake. Some folks love that first open water paddle just to see what’s going on. Sometimes the winter ice has moved things around and left some surprises. With everything waking up and the lake getting restless, it’s a good time to keep your eyes and ears open to the wonders of spring.