Tamworth–April 13, 2017–Although song sparrows are partly migratory–depending upon the severity of the winter experienced–I welcome them back as early as I can see them. How far this little sparrow migrates may only be a few days’ flying time away. The song sparrow breeds in the east from Nova Scotia to the North Carolina coast and the mountains of Georgia. It may winter south to Florida and the Gulf States.

In spring and summer, song sparrows are one of the most conspicuous of all sparrows. Males sing often, perching around eye level on exposed branches; I have one outside my office window consistently at that height.

The song sparrow is well known for being one of the first birds returning to New England in springtime, usually late March. The bird’s habitat is bushy shrubbery, and always in the vicinity of water. Low, irregular plant growth and abundant sunlight are important in this required wet, lowland situation.  The song sparrow is very fond of water, and he takes a cold bath every night after sunset; he will also bathe during the day given the opportunity. The bird likes to have a spring nearby, or flowing rill. The song sparrow will even utilize wet grass or leaves after a nighttime rain shower, throwing water over his plumage.

The song sparrow eats insects, weed-seeds and fruits it gleans from the ground, and off substrates of herbs and twigs.  Elevated perches used as song posts are an important special habitat requirement; these are essential to the male during his reproductive season.  The territory’s size is from 0.5 to 1.5 acres.

This song typically begins with several, regularly-spaced notes, with a trill following, then a jumble of notes. Song sparrows seem to learn the structure of their music from other song sparrows, and thus “local dialects” become common. No two individuals seem capable of singing another sparrow’s version of the same tune. Each song-stylist sings throughout spring and summer, with considerable rivalry between the males competing in song and flight. 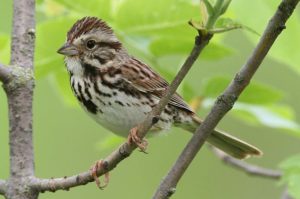 When the pair has mated, the male devotes himself to song–while she builds the nest. He may sing as many as 20 different melodies on a particular spring day in May. Authorities say he is capable of improvising nearly l,000 variations on his basic themes. He puffs his feathers, raises wings, and defends his territory with this serenade.

Young song sparrows vocalize as soon as they can fly, and begin to copy the adult birds they hear. Initially, short calls and random warblings are begun, but by fall, the songs resemble their adults’. When the first year birds return in the spring, these budding virtuosos are singing the musical phrases of the primary-song in proper sequence. Before long, the repertoire of variations on the theme becomes each’s own emergent artistry. In the old bird books, common names for the song sparrow were “Silver Tongue” and “Everybody’s Darling.” This is the avian minstrel of the briar patch.

Song sparrows are brave little birds, being very devoted to their young. Should an enemy such as a snake, cat or dog appear near the nest, the adults take their stand bravely before the threat. Their defensive posture is with outspread wings and depressed tails whenever guarding their offspring. If this bold, defiant attitude does not affect the enemy, they may even attack.

The earliest nest of the year is on the ground, well hidden under a sheltering tuft or tussock of grass in a weedy patch, or brush-pile, or below a bush. It is a neat cup of grasses, leaves, bark-fibers and weed-stems. For the next one or two broods, after the green leaves have come out, the nest is often typically constructed higher–about four feet above the ground in a shrub.

The song sparrow is the most frequently reported host of the brown-headed cowbird, except for the yellow warbler. Breeding as it does on the margins of areas sets up this inevitability. As many as seven cowbird eggs have been reported in one song sparrow nest. Though the male stands guard much of the time until the young have hatched, this doesn’t seem to deter this invasion.

In the summer, half the bird’s diet consists of insects, including beetles, grasshoppers, cutworms, and flies. Small weed-seeds account for about 67% of the yearly diet, especially in the fall and winter. Wild fruits and spilled grain are also eaten. Frequent visitors to the feeding station in the spring, they like millet, canary seed, and finely cracked-corn on the ground.

Dave Eastman also broadcasts “Country Ecology” four times weekly over WMWV 93.5 fm. As Vice President of the Lakes Region Chapter/ASNH, he welcomes you to monthly programs at the Loon Center in Moultonborough. For consultation, contact him at: cebirdman@yahoo.com (or) www.countryecology.com  for consultation. This article was also published by The Mountain Ear.