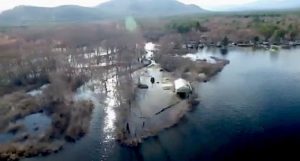 A drone shot of the Peninsula at Westward Shores Campground shows the property covered with lake water on Tuesday, April 18. Photographs and videos taken this week illustrate that the property floods at a level about a foot lower than previously thought. [Contributed Photo]

Freedom—April 19, 2017—Add this spring’s lake level statistics to the challenges Westward Shores Camping Resort faces in convincing environmentalists and local officials that flooding should not be a serious deterrent to its plan to double the number of camping units and expand to the adjacent Peninsula property.

Local residents at the site on Monday found muddy roads and soggy campsites, plus two feet of water covering the narrow access road to the Peninsula, where the business wants to install 15 RV rental units and a new septic system. A drone video taken on Tuesday showed the Peninsula fully covered by lake water and cut off from the main business.

Flooding is a known issue at Westward Shores because it is entirely on the floodplain. But this week’s photos and video validate a long-held belief by lake residents that the campground floods when the lake exceeds 409′ rather than the 410′ figure that appears in survey documents submitted as part of the expansion application. Until this week, only the anecdotal evidence of floating debris from the campground supported the claim that the 410′ benchmark was inaccurate.

On Monday, when still photos were taken in the campground, the lake level was at 409.52 according to the State Dam Bureau. On Tuesday, when the drone video showed the Peninsula still fully submerged and inaccessible, the lake was down to 409.38. The area remained flooded on Wednesday even though the lake had receded to 409.18. The Dam Bureau’s measurement gauge is on the Bearcamp River, next to the campground. The lake’s highest level this month was 409.82 on Friday, April 14. For comparison, the managed summer level is 407.25. 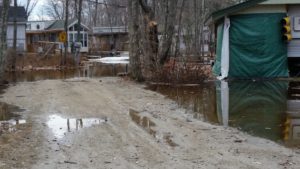 Flooded roads and soggy campsites on Monday April 17 when the lake level was 409.52, which is lower than the 410′ level previously thought to be the point at which the property floods. [Contributed Photo]

Flooding is often the result of rapid snowmelt combined with heavy rain. But this spring has seen a gradual snowmelt and less than an inch of rainfall, according to data from Weather Underground.

The lake’s tendency to flood has been a key concern of opponents of the campground expansion because of the property’s location adjacent to the aquifer. Opponents fear high water could breach septic systems and gas storage tanks, and dislodge the septic and gas connections to manufactured camper units, many of which are left on the property year-round.

Opponents also say the business lacks a viable flood evacuation plan, citing inadequate escape routes as well as the permanent nature of the camper units. They believe a lack of enforcement of zoning laws combined with the town’s approval of the expansion plan may threaten Ossipee’s flood insurance eligibility under FEMA.

Green Mountain Conservation Group and the towns of Freedom and Effingham are opposed to the expansion as a regional issue, and Freedom has filed suit against Ossipee over the matter.

Westward Shores sparked anger among lake residents last year when its CEO said fears about high water were “overblown” because floods stopped being an issue after the state took over dam management in 1999. The developer later backtracked on the statement after an analysis of state data showed at least 43 occurrences of water higher than the 410′ mark between 2000 and the end of 2015. In some instances, the lake rose more than 5 ft. above the summer benchmark, causing substantial shoreline erosion and property damage.

Historically, the worst floods on the lake have occurred between April and June. But damaging floods have also taken place in October and December, well after the lake was drawn down to its lowest level for the winter.

Note: Ossipee Lake Alliance last year documented the history of Ossipee Lake flooding based on state data. The article may be found at this link. Readers are also encouraged to submit anecdotal information on flooding to info@www.ossipeelake.org.