Ossipee—April 23, 2017—Westward Shores Campground experienced floodwaters on at least 116 days between 2000 and the end of 2016, a number nearly three times higher than what has previously been reported.

Ossipee Lake Alliance derived the statistic from state data in the wake of last week’s revelation that the campground floods when the lake level exceeds 409′ rather than 410′. The lower number of 409′ was validated by matching photos and drone videos of the flooded business against data from the automated state water level gauge next to the campground.

In one video the Peninsula was shown inundated by water while the lake level was at 409.18. Observers on the ground said the narrow road to the Peninsula was submerged under two feet of water, cutting it off from the main campground. Westward Shores plans to install 15 permanent rental RVs and a new septic system on the Peninsula as part of its plan to double the capacity of the business.

The entire campground is on the floodplain, and opponents of the expansion fear floodwaters could invade septic systems and gas tanks, and dislodge septic and gas connections to camping units. They also allege the Ossipee Planning Board violated town zoning laws when it approved the expansion on a 5-2 vote in September

The previous 410′ benchmark for flooding was established last year as an educated guess derived from topographic maps submitted to officials as part of the expansion application. Using the State Dam Bureau’s database, the Alliance last year established that there were 43 days in which the campground was at or above 410′ from 2000 through 2015. 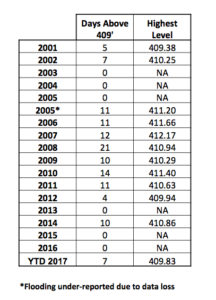 But long-time residents said the 410′ flooding benchmark was set too high, and flooding events were being under-counted. They said debris from the campground could be found floating in the lake at water levels well below 410′. Last week’s pictures and videos showed they were correct.

The new findings present another challenge for Northgate Resorts, which purchased the campground in December 2015. The Michigan-based company said it would invest heavily to revive the faded business, a message greeted warmly by lake residents and local officials who saw the potential for new jobs and site improvements.

But the scope of the plan—double the number of campsites and an expansion to adjacent residential property—alarmed lake residents and environmental groups because of the potential for overcrowding, and because the business is on the floodplain next to the aquifer, the area’s main source of drinking water.

The developer further alienated local groups by making questionable claims to the Ossipee ZBA, as reported by the Carroll County Independent, and by telling the Conway Daily Sun that flooding concerns were “overblown” because the lake stopped flooding after 1999.

The scope of the plan is so large that state law was invoked last year to make it a regional issue rather than strictly a local one. Opponents of the expansion include Green Mountain Conservation Group, the Saco River Corridor Commission, and the towns of Freedom and Effingham. Freedom has additionally taken Ossipee to court over the matter, where its lawsuit is pending.