Ossipee — May 25, 2017 — The planning board here has decided to hold off on whether to approve a proposed gas station until at least their June 6 meeting. The applicant, Valley Point, LLC, is proposing to tear down the existing buildings at the Route 41/Route 16 (the former Johnson’s Gas site) and construct a 5,000 square-foot convenience store with 25 parking spaces, drive-up window, and eight gas pumps.

Corey Lane of Green Mountain Conservation Group was not allowed to read a two-page prepared statement but did finally get a chance to make statements. The group opposes the project, citing its potential threat to the aquifer and the area’s groundwater. When Lane was recognized by the chairman, planning board alternate member Rick St. Jean apparently took issue with it and abruptly left the room saying, “More trash, lies, misrepresentations, and waste of our tax dollars.”

Lane asked to board to take the suggestion of planning board member Robert Gillette and hire an independent counsel, at the expense of Valley Point, to conduct a review of the application materials.

“The gas station has not been allowed in this area for 30 years for a reason,” said Lane. “Interested people care about this project and deserve the same type of independent review that the planning board ordered for the Westward Shores Campground expansion, “she said. Lane said the people are concerned and have been denied due process in the review of this application. 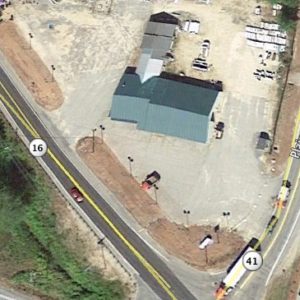 Site of a proposed gas station-convenience store development in West Ossipee. Concerns have been raised about its potential impact on groundwater.

Mark Lucy from White Mountain Survey again represented Valley Point at the May 16 meeting and discussed updates to the site plan including the fuel delivery system being moved slightly to the west, the well moved slightly at the request of N.H. Department of Environmental Services (DES) and an access drive to the Civil War-era cemetery added at the request of the town’s cemetery trustees. Lucy also said a traffic impact study began May 16.

Questions continue about site contamination, the impact the business will have on an already congested intersection and why the project was deemed by the board not to have regional impact, thus negating the towns of Madison, Freedom and Tamworth as well as Lakes Region Planning Commission special abutter status.

“People are living much closer to this proposal than I think any of you would want to do,” said Lane. Planning Board Chairman Connie Billings said the applicant has gone “above and beyond” what is required.

This project has been making its rounds of the Ossipee land use boards since at least May 2015. The property lies within the Water Resource Protection District as described in the town’s zoning ordinance. The applicant needed to receive a variance from the zoning board because the ordinance specifically states gas stations and underground fuel tanks are not allowed in the district.

They were granted the variance in a 4-1 zoning board vote in July 2015. Ralph Wurster was the opposition vote while David Babson, Ski Kwiatkowski, Stanley Brothers, and Bill Grover voted in favor. This vote allowed the project to move forward to the planning board for site plan review.

According to the minutes from that meeting, concerns were expressed from the public about disturbing the soil on-site to install underground tanks and the suggestion was made to require above-ground. The site has been under a NH DES mitigation plan for 24 years, deemed “extremely contaminated” from its history as a White’s Garage Ford dealership in the 1950s and 1960s, and leaking underground fuel tanks that date back to the early 1900s. There remains about $1 million of the $1.5 million in a N.H. DES clean-up fund designated for that site.

The planning board will take up discussion about the proposed project at their June 6 meeting, beginning at 7 p.m. at the Freight House on Moultonville Road. Billings pointed out that every meeting allows for public comment.