Ossipee—May 5, 2017—The Zoning Board of Adjustment will hold a public hearing on May 9 at the Ossipee Freight House on the proposed expansion of Westward Shores Campground. The case is back before the board on remand from Carroll County Superior Court due to a legal challenge by the town of Freedom.

Located at 110 Nichols Road in West Ossipee, Westward Shores has been seeking to add 246 new RV sites to 258 existing campsites. The parcel totals 308 acres; however, 45 acres will be placed in conservation. Westward Shores is owned by Grand Rapids, Mich.-based Northgate Resorts through Northgate Ossipee LLC. Northgate is owned and operated by the Bossenbroek family.

The Town of Freedom is concerned that the project might lead to problems with the lake’s water quality because Freedom also abuts the lake and was given abutter status in terms of Westward Shore’s case before the planning board. Freedom believes Westward Shores’ proposal doesn’t meet Ossipee’s own zoning requirements. 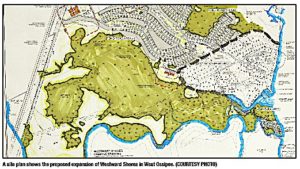 “You are hereby notified that Carroll County Superior Court issued a court order for a motion to remand to the Ossipee Zoning Board of Adjustments to hold a public hearing on the case listed below,” reads a posting on Ossipee’s website. It says the hearing is based on the zoning board’s denial of Freedom’s motion for rehearing on Westward Shores.
According to a court filing from Freedom’s lawyer, John Ratigan of Donahue, Tucker & Ciandella PLLC of Exeter, the Ossipee Planning Board approved Westward Shores on Sept. 20, 2016, and Freedom sought to appeal that decision to Ossipee’s Zoning Board.

Ratigan filed a motion in February to remand the case back to the zoning board following the board’s Nov. 8 meeting, when it declined to hold a public hearing. Freedom’s filing says the zoning board “not only denied the appellant and members of the public their right to a duly noticed public hearing, at which testimony and evidence could have been presented to the Board by Freedom and members of the public, but also such a hearing was a procedural prerequisite to the ZBA exercising its appeal power, as RSA 676:7, I explicitly states.”

Minutes of the Nov. 8 meeting show that the zoning board voted unanimously not to grant Freedom a rehearing.

“The ZBA felt this argument does not belong at the ZBA level and should go to Superior Court for determination, if so choose,” reads Ossipee Zoning Board’s minutes.

Westward Shores Attorney Peter Malia of Hastings Malia in Fryeburg, Maine, filed an objection to Freedom’s request. According to Malia, there is “no good cause” for the court to remand the case back to the zoning board.

“A remand for public hearing would merely delay this proceeding,” wrote Malia. “The ZBA would again decline to accept the appeal based on the advice of their lawyer, because they lack the jurisdiction to hear it.”

“In the interest of judicial economy, the plaintiff’s motion to remand is granted,” wrote Ignatius in her order. “Should there be further proceedings in this case, the court will endeavor to schedule them expeditiously, given Northgate Ossipee’s desire to proceed with its development.”