Ossipee — May 18, 2017 — After last week’s lengthy court-ordered public hearing, the Ossipee Zoning Board denied Freedom’s request to reconsider the planning board’s approval of the expansion of Westward Shores campground. But now Effingham is calling for that hearing to be reheld. Meanwhile, Freedom is consulting its lawyer on what to do next.

The case came back before the board on remand from Carroll County Superior Court due to a legal challenge by Freedom, which charged Ossipee with denying their appeal of the planning board’s approval of Westward Shores without holding a public hearing first.

Located at 110 Nichols Road in West Ossipee, Westward Shores has been seeking to add 261 new RV sites to 258 existing campsites. The parcel totals 308 acres; however, 45 acres will be under conservation. Westward Shores is owned by Grand Rapids, Mich.-based Northgate Resorts through Northgate Ossipee LLC, which is owned and operated by the Bossenbroek family.

Freedom, which abuts Ossipee Lake, is concerned that the project could contaminate the lake. The planning board approved the expansion last September, but Freedom believes Westward Shores’ proposal doesn’t meet Ossipee’s own zoning requirements and asked the zoning board to consider an appeal. 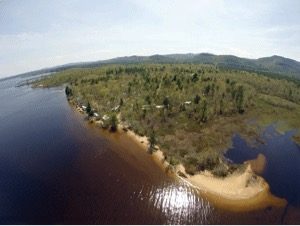 Freedom complained to the court that the Ossipee Zoning Board failed to hold a properly noticed public hearing before denying its appeal. Superior Court Judge Amy Ignatius agreed with Freedom and ordered the board to hold a public hearing, which it did May 9.

The selectmen decided they would deny the waiver request. Spencer said that might nullify the May 9 hearing.

“Selectmen do feel we should have been notified,” said Spencer. “We were notified in the past, and we did respond.”

Coming back into public session, Babb announced that the board’s position was unchanged and it would be meeting with attorney John Ratigan of Donahue, Tucker & Ciandella, at next week’s meeting (May 22) to decide what to do. The discussion with Ratigan will be non-public, but Babb said he was hopeful of coming up with a solution that night.

“We are going to do what we think is right for the people of Freedom,” said Babb.

On May 9, the Ossipee Zoning Board decided unanimously that the planning board had done a great job with the application and it didn’t need to go over it again. There is a 30-day appeal period to the decision starting May 10.

“The town of Freedom’s motivation in this case is to protect the water quality of Lake Ossipee, not to tell the town of Ossipee how to operate,” said Keach. “The goal here is to have the greatest protection allowed by law — in this case, Ossipee zoning ordinance and FEMA regulations.”

He explained that Freedom is concerned about what the town views as three departures from zoning ordinance in the approval. Two items deal with the floodplain and the third with soil types and the suitability of sewage disposal.

Specifically, Freedom questioned if part of the septic system was being installed in the wrong type of soil and at an elevation below flood level; whether a pavilion was being placed at 412.5 feet elevation, which is below the 100-year base flood elevation of 414 feet; and if occupants would be installing “stick-built appendages” to their RVs, which could be a hazard in a flood.

Malia said septic systems like the one his client is proposing could be installed with state approval, that the pavilion could be placed below elevation 414 because it would have no walls and that the Bossenbroek family doesn’t want decks or sheds to be added to RVs on the sites to be developed. They are also phasing out such appendages in the existing section of the campground where they are grandfathered in.

He also said that Freedom asked about how RVs in an area of the property known as the peninsula would be anchored. Malia said that concern will be addressed when Northgate seeks a building permit from the building inspector. He said that RVs that are proposed for the other sections of the property won’t have to be anchored because they will only be there temporarily.

Malia adding that there were five public hearings regarding the application last April and September and that the planning board called for Westward Shores to make numerous changes. He said the Ossipee Planning Board even hired an independent engineering firm to look at the application. Northgate also received various approvals from state and federal agencies along the way.

“I don’t think there’s any reason to send this back to the planning board to discuss or further decide any of these three issues raised by Freedom,” said Malia.

Residents expressed concern about flooding, especially on the peninsula.

“We know it will flood,” said Donna Veilleux of Madison, who said she spends time on Ossipee Lake. “Is there a plan in that event?”