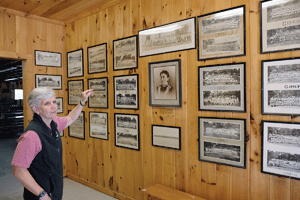 Freedom–June 16, 2017–There’s no better place on earth than Camp Huckins — just ask Jody Skelton. Skelton, who first attended the girls’ summer camp as a 9-year-old, has spent 47 summers on the shores of Ossipee Lake at Camp Huckins in some capacity — from being a camper to a counselor all the way up to director, and she loves it.

She and fellow “Hucksters” have been busy over the past year planning the camp’s 90th anniversary celebration, which takes place Saturday and Sunday, June 17-18.

There are more than than 300 alumni campers, including June (Chick) Lowd of Center Ossipee, who was one of its first campers in 1929. This year, Camp Huckins offers four two-week sessions for girls grade 3-9 (age 9-15), beginning June 24.

Campers do everything from arts and crafts to swimming (every camper learns how to swim), canoeing, sailing, horseback riding, tennis and volleyball, just to name a few activities. The camp is so popular, its roster fills each November for the following year.

On Saturday, the reunion kicks off at 9 a.m. with the fourth annual Tri-Ath-Loon triathlon. It will be followed by lunch on the ball field at noon. Hors d’oeuvres by the decades starts at 4:30 p.m., with dinner by the waterfront at 6:30 p.m. Vespers, a sunset evening prayer service, will be at 7:30 p.m., culminating with a candlelight ceremony at 8:30 p.m. Sunday will feature breakfast from 8-9 a.m.

“We have over 300 people coming, it’s gotten pretty big,” said Skelton, who noted that many will stay in the camper cabins.

“I know people are coming from Ohio, Illinois, they’re coming from all over. Every five or 10 years, we have a celebration where we invite alumni to come back to camp for a day and we celebrate things. For example, we have a five-year program called the ‘Huckster’ program, where if you stay at camp for five years you get a special necklace and you get your name on the Huckster board.”

For Skelton, camp has been a family affair. Her husband, John, has been a longtime member of the Huckins staff, and the couple’s three children —Becca, Michael and the late Jamie Skelton — grew up there, working each summer in some capacity. Becca now teaches second grade at John H. Fuller School in North Conway and will return this summer as the water director.

Camp Huckins was founded in 1928, when S.O. Huckins gave the New Hampshire YMCA some land for a residential camp in memory of his late wife, Nellie Harmon Huckins.

“The first summer,” according to camp’s website, “camp opened with seven cabins of boys, the Lodge and the Director’s House (today’s Middler Division Leader’s house). In 1929, the girls arrived on Lake Ossipee. There were four weeks of girls’ camp and four weeks of boys’ camp. The split camp continued until 1965, when Camp Huckins became an all-girls camp.”

“The Huckins family gave 7 acres and an island (just off the shoreline) to forever be a place for children,” Skelton said. “The first year it was just two weeks and just for boys. The following year the camp opened for the entire summer, and it went one month boys, one month girls. It was that way all the way up until the late 60s. Finally, there weren’t a lot of boys but a ton of girls that wanted to come, so we went all girls.”

When the Huckins family gave the land, they actually gave it to the YMCA.

“At the time,” Skelton explained, “there was a New Hampshire Y that ran the entire state. It’s all broken up now and there isn’t a New Hampshire Y anymore. We’re an independent, non-profit YMCA camp. We’re not a facility, we’re not a building, we’re not a pool, we’re just a camp. We do whatever we can in the community during the year — Youth in Government, Squeaky Sneakers, but mainly we’re the summer camp. Another program we’re doing this fall is a Freedom Family Camp.”

Skelton said at the end of each summer, Camp Huckins also offers two family camps, “for those who would like to enjoy the camp experience with their children. Instead of the campers filling the cabin, your whole family comes and we run camp. Literally, you can go fishing, sailing, swimming, horseback riding. You pick the activities that you want to do and you can do them with your mum and your dad.”

What makes Camp Huckins so special?

“People,” Skelton said quickly. “We grow our own staff, so our campers become our counselors — that’s what makes Camp Huckins so special. All of our counselors are campers that have grown up, and they come and give back because they don’t make a lot of money. They don’t come for the money. They come because they want to be here — that’s the magic.”

The highlight of the camp, in Skelton’s mind, “is just people. No cellphones. You come and live in the cabin, hang out with people, have fun. We have everything we need right here, there’s no reason to leave. Why would I ever want to leave?”