Tamworth–June 12, 2017–I had just returned back home after giving my slide-show on the wildlife forage shrubs, when I looked out at bird feeders here in Tamworth. I thought at first I was seeing goldfinches; we had just conferred about how few of them we were seeing this winter, but I noticed that these were pine siskins instead. It has been several years since I have seen these small, brownish-streaked finches which look so similar to their cousins, but there they were! And all over the hanging black oil sunflower tube, with only one or two over at the thistle feeder. Eureka! These nomadic finches made my day, as we had all just admitted how many irruptive flocks of common redpolls we’d witnessed. However, these pine siskins are much more erratic in their irregular visits to us. I find them very appealing.

This winter saw other finch species driven down from the Arctic due to a “cone crop failure” in the boreal forest–such as the pine grosbeaks and redpolls. But the pine siskin’s winter range is highly varied, with small numbers sometimes appearing throughout much of North America. Pine siskins are known for having no discernible migration pattern. But seasonally meager rations of the seeds of hemlocks, alders, birches, and cedars drive this gypsy of the bird world to be here occasionally during some winters. And flocks of birds may appear as far south as Florida. It is all about the availability of the local food supply. You may see them at a feeder, and then just as rapidly have them unpredictably disappear.

So, where pine siskins appear is always a surprise. They breed in coniferous forests containing thickets of birch and alder trees, wherever they are that year throughout their range, and are not necessarily a northern bird at all. In fact, they nest from northern Canada and Alaska and at high elevations in western areas as far south as the mountains of Guatemala! They supposedly breed at our high elevation forests here in the White Mountains, above 3,000 feet, but I have never seen one while hiking over our northern peaks. 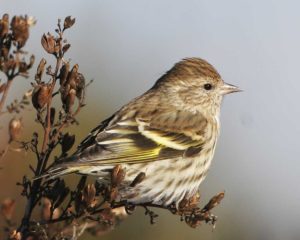 While still in their wintertime flocks of numerous individuals, pine siskins begin courting at this time of year. In the spring, their nest is usually said to be in a conifer, at least 10 feet up, on a horizontal branch well out from the trunk. Pitch pines are preferred, hence giving the origin of the bird’s name. The female will build her shallow nest entirely by herself and incubate the bluish-green, speckled eggs for a two week period. The hatchlings remain in the nest for another two weeks, and then both parents will continue to feed the fledged young for an additional three weeks.

Pine siskins will flaunt their conspicuous dark brown, striped wings at their competitors whenever landing at the thistle or sunflower tube feeder.  Note the wing and base of the tail feathers having a nearly metallic tone in their yellow trimming. They are actually an attractive bird with these patterns in an otherwise seemingly dull plumage. The wings are primarily blackish in color with buffy edges. The black tail is notched as all the finches are, and the outer tail feathers have yellow bases, too.

Very aggressive for their small size of four-and-a-half inches, and noisy, they commonly fight with one another for a perch at the hanging feeder. Pine siskins can be even feistier than goldfinches can be! Wings will be slightly spread, and the beak wide open as they deter other birds in residence.

Pine siskins feed on tall weeds down here, tearing the seed heads apart, then dropping down to the ground below to feed on them. They prefer garden-like habitats resembling their woodland edges, leading to grassy areas and weedy patches gone to seed. Their buzzing energy brings a winter day to life, with their calls of “shree” or “zzhree”. A compact flock will settle, and then spring up again, swirling about, then land almost in the same place. They frequently exist in gregarious winter groups of up to 200 individuals together at a time.

Acrobatic as well as aggressive, the versatile siskins will feed from tube feeders, trays, or globe feeders, thistle sacks, and occasionally on the ground for spilled seed there. They balance easily on the many diverse swaying devices we put out for winter birds we enjoy attracting. Various seed mixes of millet, rape, hemp, canary seeds, peanuts hearts, as well as sunflower seeds and thistle will attract the pine siskins to the feeding stations.

As you get to know them, you’ll appreciate their uncommon appearances as well as tameness towards humans, and wonder how many years from now you’ll see them once again. Three times in a decade is the average.