Ossipee  — June 8, 2017  — The planning board on Tuesday approved, with conditions, a conversational proposal to build a new gas station over the Ossipee Aquifer. Over the last few months, meetings were heated, and planning board members did some soul searching about how the board treated members of the public and each other.

Tamworth-based Valley Point LLC, owned by Laurie Cushing and Kara Norris, seeks to operate a 5,000-square-foot convenience store with eight pumps and a fuel delivery station at 2400 Route 16. There will be four 10,000 double-walled gas tanks on the property.

In 2015, the zoning board granted variances from a groundwater protection ordinance to allow a gas station and underground fuel storage tanks on the site. Environmentalists and some planning board members have voiced concern about the station’s possible impact on the Ossipee Aquifer.

After a lengthy discussion, the planning board approved the proposal with conditions in a 5-0-2 vote. A 30-day appeal period started Wednesday.

Chairman Condict Billings said the applicant’s engineers did everything the planning board asked of them and the project had to be approved because it complied with the town’s ordinances.

“The public might not be happy because it’s there, but we can’t do anything about that,” said Billings before making the motion for conditional approval.

The two members who abstained were Bob Gillette and Tim Otterbach. Gillette explained his reasoning for his abstention.

“I think the engineering crew has done a remarkable job creating probably the safest gasoline station in the state,” said Gillette. “I have no qualms about saying that. I also happen to believe it is a very bad idea to put a new gas station on top of aquifer. I’m deeply disappointed the ZBA put us in this position.”

During the meeting, the planning board put 13 conditions on the proposal that were largely redundant with what had been promised during prior meetings. Those conditions included written proof that there’s an ability to clean up offsite wells, any soils contaminated by the prior occupants of the land would be disposed of according to state regulations, no buildings could be constructed until the site is deemed clean, the oil-water separator shall be emptied following any spill requiring state notification and also be emptied semi annually, the continuation of ground water monitoring and that all local, state and federal permits shall be in place prior to construction.

A previous gas station on the site had a spill discovered in 1993. But the site has been cleaned up and the remaining petroleum plume has migrated under Route 41 and a “down gradient” property nearby.

“It saddens me to see how disrespectful this board can be sometimes to the public,” said Legendre. “There is no excuse for it… I believe we have a member of this board who needs to be dealt with.”

Lane and the man had argued for an independent review of the site and they were also concerned that there may be more contamination on the site. Planning board members argued that the state department of environmental services would do that type of work.

Barron said if the project meets all the requirements, it has to be approved. He said if Lane didn’t like it, she could “sue our asses.” 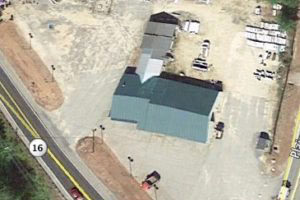 Audience member Joyce Watson, who owns land in Ossipee, said she was “almost embarrassed” by what goes on in the Ossipee Planning Board.

“Maybe I’m being childish, but I think everybody needs to grow up and be men and women,” said Watson, adding when she served on town boards she would not act like the Ossipee planning board members.

St. Jean left the meeting when the man said he wasn’t getting respect from the board. The man said he saw another Ossipee meeting in which an audience member said something that caused two planning board members to walk away.

After the gas station was approved and people were filing out of the room, a planning board member asked if they should discuss Legendre’s comment.

Barron replied he didn’t think so and planning board member Peter Zavas began yelling and cursing at Barron who yelled right back.

“Roy, who the hell gives a s— what you think,” said Zavas. “Seriously, don’t tell me what to think.”

Other members called for calm.

“This board represents the town and we should not be acting in this manner,” said Otterbach.

Billings replied that he’s trying to get it under control

“No, be quiet now please,” said Billings to Otterbach.

Later on in the meeting, Zavas apologized to everyone for his “outburst.”