Conway — June 18, 2017 — In a pointed editorial cartoon, the Conway Daily Sun appeared to take a satirical shot at Ossipee officials after last week’s Zoning Board decision to uphold the Planning Board’s approval of the controversial expansion of Westward Shores Campground and Marina.

The cartoon, posted in the Week in Review section of newspaper’s Saturday edition, shows a couple in a partially submerged RV asking a fisherman: “Pardon me, but is this Ossipee Lake?” The boat is labeled “Freeman,” a reference to the Select Board’s representative to the ZBA, Bob Freeman, whose quote at last week’s ZBA hearing provides the cartoon’s punch line: “We don’t want nothing to end up in the lake. That lake is our income.” 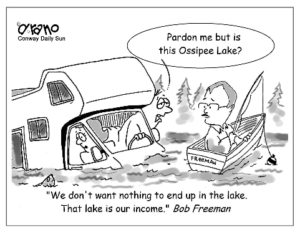 The cartoon is a flash of irony in an otherwise humorless situation pitting Ossipee against neighboring towns and local environmental organizations that are opposed to the expansion, which will double the capacity of the business. Opponents say the Planning Board’s approval violates the town’s floodplain zoning ordinance and threatens water quality. Freedom has sued Ossipee in state court over the matter.

Last week’s ZBA ruling was the third on what amounts to the same issue. After the Planning Board signed off on the expansion in September, Freedom appealed the ruling to the ZBA, saying it violated town zoning. The ZBA declined to hear the appeal, but was forced to do so after a state court judge stepped in and mandated it. That hearing was held on June 13.

Effingham also has abutter status in the case, and its officials complained to Ossipee that it had not been properly notified of the June 13 hearing. After first suggesting that Effingham retroactively waive its right to be heard, Ossipee officials scheduled the hearing that took place last week, but the outcome was the same: the ZBA denied the appeal and reaffirmed the Planning Board’s approval of the expansion plan.

While work at the site largely remains on hold, the highly charged case continues to wend its way through Superior Court. Last week, the Conway Daily Sun reported that Ossipee’s Select Board rejected a proposed settlement of the lawsuit, although the town has not publicly commented on what kind of settlement terms were proposed.

Also unresolved is the question of whether approval of the expansion will jeopardize Ossipee’s eligibility for federal flood insurance. An official with the New Hampshire Office of Energy and Planning, which oversees FEMA-related floodplain programs in the state, said she met with Ossipee officials on the Westward Shores matter on May 18. Neither the town nor the state has released details about the discussion.