Tamworth–July 13, 2017–Over the last few years, you may have noticed fewer tree swallows competing for your nest boxes’ occupancy, while you earnestly hope to attract a bluebird pair on your open land. Populations of birds that eat flying insects have been dropping at an alarming rate, especially in northeastern North America. Birds in this group include swifts, flycatchers, kingbirds, purple martins, and all of the swallow species. This has been a concern of N.H. Audubon, and there is a concerted effort to find out why, concentrating mostly on the colonial members of the swallow family at their historic sites.

A number of publications have addressed this topic. One of the most ambitious efforts analyzed data from long-running tree swallow nest-study sites across the continent. As you know, once you have tree swallows, you’ve got them for generations!  They come back to open space bird houses they hatched from like salmon. I have even seen them hover over the spot that nest box usually is at; if one has stored birdhouses overwinter in the barn or garage. That “Che-deep, che-deep” sound on a late April day means spring has surely arrived for me. 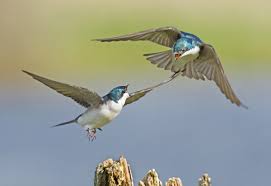 Study results showed that tree swallows are indeed declining in the northeast, but also unexpectedly revealed that the species is increasing in other parts of its range. I’ve seen them doing well in Montana. Specifically, all six study sites that were in the northeast had declining trends, while four of the ten sites elsewhere in North American had increasing trends.

While an article by David Shutler and 23 other authors looking at these patterns provided good news about tree swallow populations in parts of their range, it doesn’t shed any light on why the species is declining here. Several potential causes have been suggested, including forest regeneration taking over fields, climate change (causing life cycles of insect prey to be out of sync with the timing of nesting activity), and acid precipitation (which reduces calcium availability for insects, and therefore results in calcium deficiencies in birds). However, each of these explanations falls short in one aspect or another, leaving researchers scratching their heads about the declines, just like us. I am beginning to miss them after years of plenitude.

In the winter issue of Bluebird in 2014, a NABS couple wrote about the number of insects caught while tree swallows forage. They noted these blue-backed swallows eat many flying insects such as beetles, horseflies, dragonflies, winged ants, moths, and mayflies. This is in addition to the mosquitoes and black flies we know they eat during breeding season.

Patrick Smith and his wife Bet Zimmerman Smith stated tree swallows may travel 20 miles or more to forage. Another NABS veteran birder stated that adult tree swallows will consume about 2,000 insects on the wing, and also feed 6,000 more to their young in the nest box, over a 45-day period. Since 90% of their hunting takes place below 39 feet, these birds can be very helpful to us during bug season preventing at least some misery from biting insects pestering us.

Obviously a single mosquito doesn’t make much of a meal, so the swallows make a lump of them, packing them in their throat into a BB-sized ball called a “bolus” which they then bring to their 6-7 young. About a week before fledging, youngsters stick their heads out of the inch-and-a-half sized entrance hole, anticipating their parents’ return. A few will become “hole hogs” as they outcompete their siblings for food. I like witnessing their blue feathered and white heads doing this; it lets me know their progressing growth.

When the tree swallows leave their nest boxes throughout July, the brownish babies can fly very well from the first. Tree swallows do not return to the box once fledged, though I have seen a few that wished they had not exited.  They may perch close to it, and seem worried about their new life. Parent birds will encourage them to get over it, and join them swooping in the air. This commonly only exists for a day or two at the most.

The parent tree swallows do not feed these fledglings beyond a few days, while bluebirds and cardinals help with food for up to four weeks after theirs leave the nest. Tree swallows do not eat birdseed, nor will they come to a mealworm feeder. They do eat berries from the myrtle family during winters and spring migration. Bayberry plants on the seacoast are most helpful then. Breeding swallows of all species may eat crushed eggshells from the ground for their calcium need, and that is what I do after emptying a carton following some eggs and bacon breakfasts.