Tamworth–July 9, 2017– Years ago it was deemed a southern bird, often only experienced below the Mason Dixon line.  When I read birding books of that time, I realize it was a treat for those traveling to the southland to finally hear the bird’s whistled “Peter, peter, peter!” along about the time they reached tidewater Maryland.

When the state’s Audubon Society originally began its annual backyard survey of early February tracking the northward expansion of the cardinal and mockingbird as southern species, it included the tufted titmouse too. This started in 1967, and I suppose I have been participating since about 1982, living down near the Seacoast. It is well known that all these species mentioned, including the mourning dove, have substantially and constantly increased their numbers in New Hampshire.

There were only four tufted titmice recorded in that first report, but then the highest count occurred in 2003 at 2,953 birds. I can believe it!  This increase has been distributed across the state, moving from the southern regions up to our White Mountains. However, it seems that our great White Hills are becoming a barrier to further northward expansion into Coos County. Dr. Pam Hunt of ASNH speculates that global warming might help the little gray, crested bird eventually colonize the North Country–maybe up to Pittsburg. 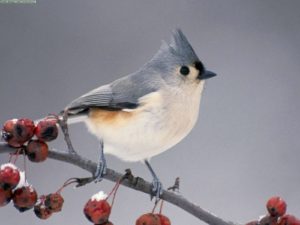 Oaks and titmice go together, as this determined little bird pick-axes the outer shell of red oak acorns with its sharp bill for food. I marvel that this impudent, small creature gets its sustenance in this manner, but it does. That huge red oak across Bryant Road, where I live, delivers its crop for this bird as much as it does for blue jays in the neighborhood. The older the tree gets, the more acorns it will produce, too. I appreciate its wide-branching, heavy-limbed presence. The appearance of tufted titmice indicates that a mixed deciduous forest of oaks and other nut-producing trees is present around one’s domicile.

Sometimes I have all three of our conspicuously crested birds at the feeder: the brazen blue jay, the colorful cardinal male and his more subdued mate, and the saucy tufted titmouse pair, all at the same time. Titmice are social birds and in the winter months temporarily join up with the local flocks of chickadees, kinglets, nuthatches, and woodpeckers. They merge right in there as party crashers as they hop aboard the sunflower feeder, but are not as tame or confiding as the chickadees are. I always hear the black-caps signifying to the other birds that I am about to reload the hanging feeder with more black-oil sunflower seeds and chips. They acknowledge that service!

As the late winter months move into thawing snow and warmer temperatures when we venture outside, I enjoy the titmice males sending out their 4-8 series of notes denoting their presence. Their loud “Peter-peter” song seems to be too high volumed for such a little bird of six inches.  It is sung year-round, but I tend to hear it the loudest in the early spring; it carries a considerable distance. The pair bond maintains a 10-15 acre territory.

Titmice cling to the bark of trees and often turn upside down on branches to pick spiders and other insect life from the undersides of leaves or twigs. They are agile and persistent. Their large dark eyes are prominent as are their rust colored sides as they do their work. Mostly, the bird is gray above and white below.

This is a cavity nesting bird, but I have yet to have one accept a birdhouse. It would go easily into a bluebird house, but its required dimensions are usually the same inch-and-a-quarter hole that nuthatches and chickadees use, as well as four-by-four inch interiors. Chickadees can get into an inch-and-an-eighth wide entrance, but I supply that bigger sized hole.

In the wild, titmice will choose a natural cavity such as a woodpecker hole, anywhere from two feet to over eighty feet above the ground. The bottom of this nesting cavity will be lined with bark strips, dead, dry deciduous leaves, and moss and grass. The cupped nest may be lined with animal hair and fur, or bits or string and cloth. Each spring, I always put out the combed hair from the dog in a wire mesh container for these birds to pull out fibers for nest building. Like the chickadees and nuthatches, the female titmouse will pull this material over her eggs when briefly leaving for hunting. This keeps the eggs warm when unattended.

The male titmouse brings food to the female while she is incubating; he calls her from the nest for the offering.