Ossipee—July 7, 2017—This week brought news that Bruce Bedford’s photo archive is being posted online for all to access. You can find it at www.yourarchivist.com/bedford.

Those of a certain age will recall that Bedford was a fixture at the Carroll County Independent for years, roughly from the early 1970s through the mid-1990s. Shooting in black and white, he had a unique style and a keen eye for rural life that made standouts of routine news photos and drew legions of fans for his weekly photo-feature, “This is Carroll County.” 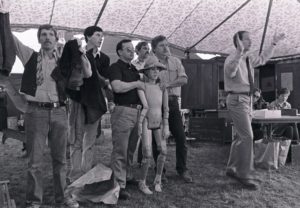 In the process, he won awards—several times he was the New England Press Association photographer of the year—and helped put the Independent on the map among the state’s weekly newspapers.

Bedford, who also worked at the Conway Daily Sun in the mid-2000s, died in 2011. Two years later, his negatives and contact sheets in the Independent’s files were rescued and donated to the Conway Historical Society after the paper was sold to the Salmon Press and the paper’s Ossipee office and printing plant were shuttered.

In a letter to the editor of the Independent this week, Keith Simpson of Wolfeboro said the historical society has authorized him to make many of the photos available online to document the county’s history. He estimated there could be as many as a half million negatives in the archive.

Visitors to the site can browse as a guest, or register and comment on the photos and receive emails whenever Simpson uploads a new batch.