Ossipee—September 17, 2017—Ossipee’s Board of Selectmen voted on September 11 to petition the state for approval to hold a special town meeting in November so that residents can decide whether to purchase an Ossipee Lake campground for $1.2 million.

The option to purchase 53-acre Camp Sokosis, which is on the big lake, was announced in August by Select Board Chairman Richard Morgan, who has been leading the board’s search for a new public beach. The campground property is accessible by a private way, Gretchen Road, off Route 16B, and town-owned Hodgson Shore Road, off of Route 25 East. 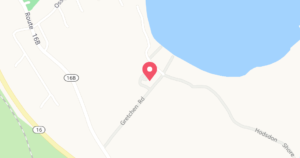 Location of Ossipee Lake’s Camp Sokosis, as shown on its Facebook page.

On September 13, the Select Board posted an intent-to-file notice on its website, triggering a mandatory 10-day public notice period. At the end of that period, the town will file its request to hold a November vote.

Two-thirds of the residents present at the special meeting must authorize the purchase and sign off on the board’s proposed operating plan for the business, which includes 45 seasonal campsites, 24 boat slips, four moorings, and 200 feet of shorefront.

At the August announcement of the agreement with the seller, Selectman Morgan said revenue from continuing to rent the boat slips and 30 of the 45 seasonal campsites would likely generate enough revenue to pay for the bond.

“This is a perfect opportunity for the Town of Ossipee to have a beach on Ossipee Lake without the taxpayers having to pay for it,” he said, according to the Carroll County Independent.

Morgan indicated that after the state approves the special town meeting, the Select Board will convene a series of public hearings to discuss the details of the plan and receive input from the public.