Ossipee—October 19, 2017—With the ink barely dry on the judge’s decision, board member Richard Mor­gan announced last week that selectmen will be eliminating the “camp­ground in its entirety” if voters approve $1.2 mil­lion to purchase Camp Sokokis. On Oct. 13, a superi­or court judge heard the selectmen’s request for permission to hold a spe­cial town meeting in No­vember. With a signed purchase and sales agreement that expires on Dec. 31, selectmen argued that the request qualifies as an emergen­cy need as required un­der state law.

That purchase agree­ment, signed by the three-member board Aug. 15 and then by Camp Sokokis owner Dianne Sheehan Aug. 16, has just three con­ditions. First, the main road leading into the campground will remain named Gretchen Road. Second, no birch trees will be removed along Gretchen Road unless absolutely necessary for public safety. Lastly, the town will “continue to allow campers to rent campsites on the proper­ty until at least the 2020 season” and the rents will not be increased for three years.

Since the agreement was signed, Morgan first said 15 campsites would be removed nearest the 200-foot shoreline. On Oct. 13 came Morgan’s announcement that the campground would be eliminated completely. Originally, he said, he thought the town could continue to operate the campground, and that revenue generated from that business could be used to pay the bond pay­ment. Morgan said what changed his mind is “the conduct of some of the people at Camp Sokok­is.” He did not, however, elaborate on what “con­duct” he was referring to. 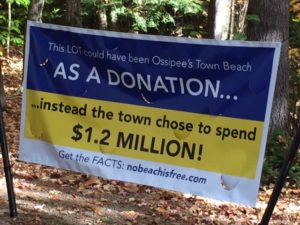 Sign posted at Camp Sokokis questioning Ossipee’s proposed purchase of the property. The town says it will close the campground if voters approve the purchase.

The Oct. 13 court hear­ing was open to the pub­lic. Two people filed to speak against the town’s petition, both seasonal residents of the camp­ground. Morgan called their effort “pathetic” and nothing more than an attempt to “stop Os­sipee people from having a vote.” Thankfully, he said, their argument did not prevail, and the spe­cial town meeting will move forward Nov. 28.

At the Nov. 28 special town meeting, voters will be asked to approve the town getting a loan for $1 million and taking the remaining $200,000 purchase price from the town’s fund balance. The vote will be by secret bal­lot, and must pass with a two thirds majority.

In the meantime, there will be an infor­mational session Mon­day, Oct. 30 at 6 p.m. at Ossipee Town Hall. Se­lectmen expect to have conceptual drawings of the proposed town beach and adjoining 52 acres as well as provide other information and answer questions. In early November, though no date has been set yet, the budget com­mittee will also conduct a public hearing and make their decision whether or not to recommend the $1.2 million expense.

“People come from away and pay $34 or $50 a year in taxes and try to tell us we can’t dop this,” Martin said, adding that the town can afford to buy the property and should be able to do so. She called opposition efforts “so un-American” and the “Do the Math” road signs that have popped up all over town cowardly because they are not attributed to any person or organization.

She urged Ossipee voters to “Get on your red, white and blue and vote.”