Freedom—November 3, 2017—The storm that hit New England last weekend brought heavy rain and high wind to the area, with damage especially acute in the North Country, where many were reminded of Hurricane Irene six years ago. There was wind damage on the lake, but the main impact of the storm was from the rain, as documented by the state’s lake level measuring equipment on the Bearcamp. 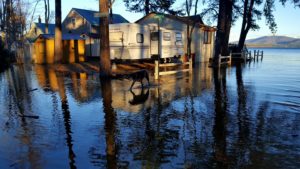 On October 26, the lake was at 406′, about a foot lower than the managed summer level and on its way down to the winter target of around 403′. But by the 28th, the lake had exceeded the summer level and kept rising, topping out at 410.12 on Halloween.

There it stayed for a few days before starting to recede. Today, six days after breaching the summer level, the lake remains at flood stage, just above 409′.

While most of the lake’s flooding occurs in the spring, October “surprises” like this one are far from rare, according to research conducted by Ossipee Lake Alliance. In October 2005, for example, 11 inches of rain fell and took the level to 411.3′. Had the state not initiated an early drawdown that year after Labor Day, officials said the level could have risen to 414.75′, exceeding the level of the damaging 1998 flood. 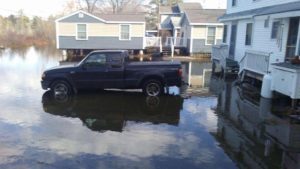 Improvements to the dam have helped state officials keep better control of the lake level, and further improvements are planned for next year. But the fact that the lake is fed by so many rivers and streams with only a single outlet means flooding is inevitable.

Flooding was one of the concerns behind the opposition to the expansion of Westward Shores Campground, which is on the lake’s floodplain. Critics charged that Ossipee’s approval of the expansion violated town zoning, including its FEMA-based floodplain ordinance. Freedom sued Ossipee over the matter and the issue remains in litigation.

Meanwhile, Mother Nature continues to remind us that she has the upper hand on Ossipee Lake. As the waters rose in the most recent storm, area residents used Facebook to post pictures of swamped docks and water lapping at foundations, while bemoaning the loss of anything left on the shore and not tied down.