David George Haskell wrote a superb article in the autumn issue of Northern Woodlands entitled “Song of the Balsam Fir,” and while he evolved eventually into that subject, he ruminated as a book writer about the chickadees he encounters every year whenever he visits into that habitat.

He is an esteemed professor at the University of the South in Sewanee, TN, and so informs you what kind of brains exist at that level in Natural Resource education. He is destined to be the keynote address speaker at the magazine’s Northern Woodlands Conference, and I still wish I had adequate bodily health to attend, because there is good stuff going on nowadays.

The piece quoted was from his book, “The Songs of Trees: Stories from Nature’s Great Connectors”, where he defines what goes on under the forest floor and beyond, which most of us will never connect with. 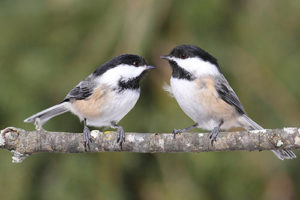 He starts off with this excellent lifted article describing chickadee behavior around a favored balsam fir to illustrate what they usually do, whenever he sights them yearly. He becomes bodily passive in their whereabouts, absorbing whatever they do around his body as they forage.

It is good environmental reporting, which several of my reading fans also personally witness from year to year with these small birds. They become amazed the intelligent communications chickadees obviously exhibit within their flocks. So, I thought I would reproduce his writing here, instead of discussing how intelligent balsam firs are, as the mainstream of his writing. And, please subscribe to this Corinth, VT publication and gain whatever they are discussing.

He states, “Of all the birds that work the balsam fir, none are as vocal as the black-capped chickadee. Like the restless movement of their bodies, chickadee sounds swing and hop, flickering through pitch and rhythm. They punch the air with guttural deer deer, then ascend an octave and give a quivering two-noted squawk like the rubbing of glass.” He observes, “High jabs intersperse slurs, then the voice drops to a throaty chik-a-dew dew, the call that we humans used to give the species its name.”

He observes that when he visits the grove, the chickadees flock to him, with a thorough inspection. “One arrives and jumps its calls to the higher registers, then half a dozen more birds gather around me.” He freezes and they perch around him on bouncing fir twigs just centimeters from his face.

Haskell watches them pass their beady eyes over him, as their voices rasp. They wing from one side of his face to the other. He sees gray plumes over their shoulders, blade-edged flight feathers, and the combed felt on their cheeks. Sometimes other birds are drawn to this chickadee gathering, and he thinks this might be their responding to a change in acoustic “news ticker.”

Most striking to him are the fine variations of timbre and inflection that emerge from his close hearing of the chickadees’ chattering. Many sonic variants of the deer call are heard. He states we have only a weak grasp of how these sound textures tell of their experiences of their world. Some calls predominate during the breeding season, or given near the nest. Other of their sounds transmit information about danger, using slight acoustic variations for encoding information about the threat denoted and about different predators. And other forest birds listen in to gain information that the chickadees have found out…

Inside their small skulls, the sophistication of the neural capacity of black-caps increases in autumn. The part of their brain that stores information gets larger and more complex. Haskell says this allows the birds to remember the locations of the seeds and insects that they cache under bark and in various clusters of lichen. The superior memory of these little birds is a natural preparation for the hungrier days of late autumn and winter.

The seat of spatial memory in the brains of chickadees that live in our northern forests is particularly voluminous and densely wired, he states. Natural selection has worked winter into these birds’ heads, molding the brains so that chickadees can survive when food is scarce. Sometimes I feel like an Abenaki Indian in his natural world when I write of such things.

Chickadee memories also live within societal relationship. The birds are keen observers of their fellow flockmates. If one should happen on a novel way of finding or processing forage, others will quickly learn by seeing. Haskell says that this memory passes through generations, living in the social network, and no longer dependent on one individual. These traditions trump individuality, as birds will conform to their group’s preferred habits even when they have successfully tried another way of feeding. Chickadees in one part of the forest thus might have one technique that is not mirrored by a separate flock elsewhere.