Tamworth—February 21, 2018—Cornell’s Living Bird magazine featured the Gray Jay early the past winter; the main theme of the story is that it is suffering from climate change. Bouts of thawing weather ruin its habit of storing putrescible food which can rot in moments of warmth. This curious bird of the boreal forest north of us stores portions of perishable food continuously over the summer and fall, having a couple of interesting attributes to accomplish this habit. (Some of this may be carrion from a dead moose or other animal.)

First of all is its conspicuous memory for remembering where it did this throughout the season. Then it selects black spruce bark to hide the food and perhaps there is a chemical reason inherent in this coniferous species to help that storage. Third, the gray jay has copious amounts of saliva to glue that forage in the crevice, holding it there with gooey globs. It needs the cold temperatures of the Canadian and Alaskan coniferous forest to exist while other birds leave. (It can survive cold blasts of 40 degrees below zero.) But its technique of storing food continuously through the year is now coming into trouble with climate change influences. 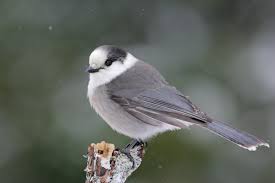 Gray Jays hide little caches of food throughout their territories in late summer and autumn, so they’ll have a ready larder for winter. They take many leisurely trips to these various locations and create a stocked pantry of mushrooms, nuts, berries, and venison. Black spruces’ bark is flaky and ideal for this clandestine hiding. This frozen food storage is unique compared to winter birds like chickadees which forage opportunistically each day.

Corvids are pretty smart in general, and we all acknowledge that. Gray Jays are known as jovial “camp robbers” in our woodsy terminology and have another common name that came down from the Cree, which we utilize as “whiskey jack’–translated from their language as “Wisakedjak” which meant the trickster spirit of the forest.

Those hiking recreationists that have encountered bold gray jays know they are very impulsive and quite tame characters, advancing themselves upon an alpine hiking party hoping to gain some food crumbs from their lunches or snacks. Ed Parsons asked me if this could alter their wild living ways, and I replied I didn’t think so—it has gone on too long! Folks receiving the mischievous gray jays’ advances on our coniferous summits gladly respond to their charismatic begging, and often photography their landings when taking offerings from their hands and hatted heads. They become a cute joke in greeting us.

Research has been going on for a long time. The Gray Jays of Algonquin Provincial Park have been studied since the sixties, and warmer temperatures equal spoiled food and gray jays nests failing en masse.  This park is 200 miles north of Toronto. For the past 40 years, this project has documented a stark downward trend by researching faculty members of Ontario’s University of Guelph. There has been a 50% decline over this study’s time.

Gray Jays can hide up to 1,000 little food packages per day, and perhaps up to 100,000 each season. Then they have to remember where they did that over territories that can be over 140 hectares during nesting season. All of this gets them through lean cold winters when other birds cannot even exist in the same conditions.

In 2006, Don Strickland, the leading Algonquin park naturalist who continued the study, published a paper that correlated unseasonably warm autumn weather in Algonquin with lower gray jay reproductive success. He suggested that effect caused the bird’s stored food to spoil. He called this “hoard rot”. Ryan Norris, a scientist featured in this article, stated that the winter of 2014-2015 was bitterly cold in the park and that spring the Gray Jays enjoyed their highest reproductive output in the study’s many years. A record number of pairs produced clutches of four offspring, compared to their more usual two or three eggs. Nestling survival was 100% across the area, which included more than 20 nests. Sixty-nine young jays were added to this local population with a recruitment rate up to 50% over the long-term average.

The next season saw a warm autumn and things stalled out with several nestlings found starved to death; nest failures were up to 50% by the end of the breeding season. This was the highest failure rate in the history of the Algonquin’s study. The winter’s snow cover was sparse and patchy, with several weirdly warm days when the snow would melt during the day and refreeze at night. Winter temperatures in the park were no longer getting low enough to properly freeze the food caches and decomposition could not be staved off. This led to less nutritional value just like it would be for us with “freezer burn”.