Freedom—June 24, 2018—Thanks to the Loon Preservation Committee’s webcam, wildlife lovers last week witnessed the birth of two loon chicks in real-time, and were able to stay tuned while their parents prepared them to leave the nest and head for open waters to be raised.

In addition to the protection provided by the loon parents, loon chicks around the state are annually protected by lake volunteers who coordinate with experts at the non-profit Committee to identify nesting sites and help ensure that humans steer clear during the breeding season. On Ossipee Lake, volunteers like Dennis Gould manage that effort.

Gould said he believes there are five pairs of loons that are potential parents this year.

“We were able to locate nests already in place and one that appears to be in development,” he told the Alliance’s Susan Marks.

While the precise locations of the nesting sites are never released, Gould said two sites are on the big lake and one is on Broad Bay. The hoped-for fourth nest, which has not yet materialized, is on Berry Bay.

“All of the areas I told the biologists we would find pairs and nests we actually found,” Gould said, noting that some locations have been used in previous years by the loons.

Once the Ossipee Lake nests were identified, Stevens returned to go out with Gould and volunteers Bonnie and Paul Elie to rope-off the nesting areas and deploy floating signs asking boaters to keep their distance. Some sites, now and in the past, are in locations where boat traffic is light or unlikely, while others are near populated areas. 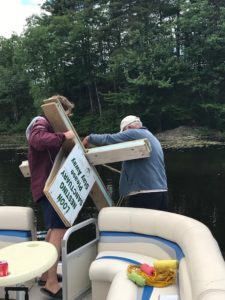 Stevens said that due to the large number of lakes and loon pairs that require monitoring, he would be “depending heavily” on the volunteers’ observations throughout the field season, asking that they call or email him right away if there are important events to report, such as a pair returning to a nest, a nest initiation, or a nest hatch or failure.

He said his request “holds especially true” for loons that require rescuing or dead loons, although “we have our fingers crossed that we won’t have to deal with that.” He added that photographs are recommended and highly encouraged. 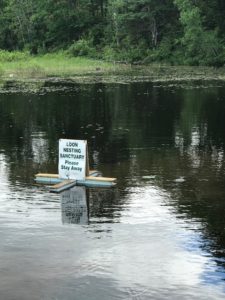 Ossipee Lake’s loons are also tracked by volunteers in the Loon Preservation Commission’s annual mid-summer loon count, during which loons are documented on the big lake and bays for a one-hour block of time on a designated Saturday in July, according to Ossipee Lake Alliance co-director Susan Marks.

“We are very fortunate to have dedicated volunteers to help out with this,” Marks said.

“Dennis Gould has always volunteered and organizes the entire big lake where he has worked out a grid system with Ed Green and other volunteers to count all the loons up there.”

Anyone wanting to report important information about loons, including injury or harassment by boaters, should contact Henry Stevens at (603) 583-1009 or by email at lakes@loon.org.