Freedom—July 27, 2018—Over the last few years, if you’ve made your way around the lakes of New Hampshire, you may have seen a man swimming alongside a few boats, methodically making his way from one end of the lake to the other.

Be it Newfound, Sunapee, Squam or the biggest of the state’s lakes, Winnipesaukee, Michael Welsch has probably swum it. And on Thursday morning, he set out on Ossipee Lake for his latest challenge, though this one was just a warm-up for a bigger swim coming next month in the Lakes Region.

Long distance swimmers are not uncommon, but what makes Welsch a little different than the other swimmers is that he is doing it with a prosthetic leg.

Welsch was in the United States Marines in 1978 when a motorcycle accident fueled by alcohol cost him his left leg below the knee and completely altered his life. Over the course of 10 years, Welsch underwent 25 surgeries that included re-breaking his right leg and putting in a metal rod.

In the decades since that accident, Welsch has used participation in marathon sports to prove to other people with disabilities just what they are capable of. Welsch has participated in numerous triathlons and races, including running the Boston Marathon more than 10 times but swimming New Hampshire’s lakes has developed into a passion for the Massachusetts resident. He began his quest by swimming all four of the Connecticut Lakes over the course of two days and decided he wanted to tackle the rest of the lakes.

He hit the big one first, swimming from Alton to Meredith, which took him 16 hours and since then has swam the majority of the large lakes. However, last summer, he was supposed to swim across Lake Winnisquam when a medical emergency forced him to postpone the swim.

“It’s been gnawing in my head since then,” Welsch said as he prepared to swim in Ossipee Lake. “We had it all set up.”

So, in preparation for Winnisquam, Welsch met up with a team of volunteers at Susan Marks’s home on Ossipee Lake in Freedom on Thursday morning with the mission of swimming the length of Ossipee Lake. The idea was to set off on a boat to the northern point of the lake and then swim south to the natural area at the southern end. 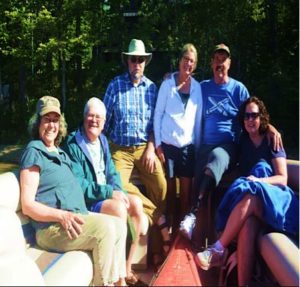 The Ossipee Lake swim came less than a week after Welsch participated in the Swim for a Mission event on Newfound Lake, which raised money for veteran’s causes. Welsch often raises money for the Pan Mass Challenge, a bicycle ride throughout Massachusetts that raises funds for the Jimmy Fund.

While Welsch swam in Ossipee, a kayak and canoe, paddled by Jim McElroy and Tom O’Brien will be alongside and they were also carrying food for Welsch.

“I feel good,” Welsch said. “It’s a relatively short swim (3-4 miles) so I won’t be in the sun that long. And I don’t want the crew to be in an uncomfortable situation.”

Welsch completed the Ossipee Lake swim in right around two hours, which he said was an “unbelievable time” and was so pleased with how quickly he made the trip that he continued up the channel for another mile or so, finishing with close to three hours in the water.

He praised the Marine Corps for giving him the toughness and the never quit attitude that has been a hallmark of his swims over the years. Welsch also dedicated the swim to a friend of his who is battling cancer. He also noted that he was appreciative of the support he got from his employer, the Francis Wyman Elementary School in Burlington, Mass.

Welsch also pointed out that he was close to getting a new leg, one he called “a step ahead.” He noted it has three computers and two sensors to help make movements even easier. Not that he needs any help in swimming. He’s got that part down pretty well.