The following is adapted from articles published by the Alliance in October 2016 and April 2017. This is the final article in the series we’ve posted in advance of the state’s presentation on its planned replacement of the dam in 2019. That presentation will be at Freedom Town Hall at 10 AM this Saturday, August 25.

Ossipee Lake is prone to floods, ranging from major events that send boats and docks down the Ossipee River, to smaller occurrences that chip away at the shoreline and float whatever has been left on the beach, whether a kayak, a pair of water skis or a gas can.

To understand why we’re prone to flooding, consider the Bearcamp River, one of the lake’s largest tributaries. It begins as a spring in Sandwich Notch and flows through Sandwich, Tamworth, and West Ossipee before emptying into the lake.

What ends up here, however, is more than spring water from the Sandwich hills. Eight rivers feed into the Bearcamp, including the Chocorua River, Cold River, the Wonalancet River and Mill Brook. When there is heavy rain or significant snow melt or both, these incoming waters build up force and push the Bearcamp toward its terminus at Westward Shores, where the state maintains equipment to measure the water level.

Consider also that the Bearcamp is just one of four major tributaries that empty into the lake. There’s also the Pine, West Branch and Lovell rivers, all of which have individual sets of waters feeding into them. Smaller streams and brooks, named and unnamed, also pump water into the lake from the surrounding area. 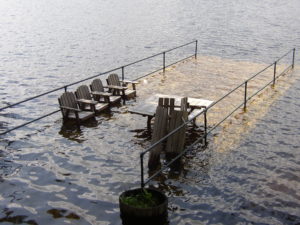 High water on Berry Bay swamped this dock in April 2007. It took 12 days for the lake to recede. Alliance Photo

As a result, Ossipee Lake is a kind of bowl fed by water seeking a path to the ocean through the only outlet, the Ossipee River Dam. To get to the dam, the water has to pass through the big lake and bays, as well as the narrow channels that connect them. These natural bottlenecks slow the water flow and cause the lake to rise.

Determining the Flood Stage
The state has measured the lake’s water level daily since 1983, and in 2017 the Alliance established an unofficial benchmark for flood stage by matching years of state data with drone videos recorded at Westward Shores during that April’s flood.

As a result of that research we know the lake floods at 409’—a full foot lower than the 410′ benchmark previously thought to be the unofficial flood stage. By using the 409′ benchmark, we subsequently established that the lake was at or above flood stage for 219 days between 1983 and the end of 2017. Almost 60% of those days occurred between 2000 to the present.

In addition to understanding the level at which the lake floods, it’s also important to know that high water recedes slowly because of the “bowl effect.” In the Mother’s Day Flood of 2006, for example, the lake was at or above flood stage for eight days before receding. In April a year later, the lake was even higher and remained at flood stage for 12 consecutive days.

Spring rains combined with snowmelt typically make April a good bet for high water, but flooding can occur in any month. Major rainstorms in June 1998 resulted in a destructive flood that forced the emergency evacuation of Westward Shores campground and other low-lying properties. 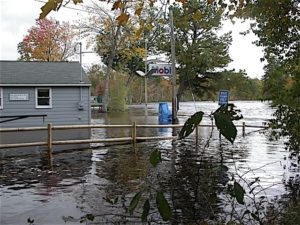 Lakefront Landing Marina during an October 2005 flood. A lucky early drawdown of the lake mandated by the state averted worse damage. Alliance Photo

Although the state’s water gauge failed during the storm, dam officials subsequently established a high-water mark of 413.73′ — more than 6 ft. higher than the summer level.

An even bigger flood would have occurred in October 2005 had the state not mandated an early drawdown to accommodate property owners who wanted to perform shoreline work. After reaching a winter-like low of 403.84′ on October 8, more than 11 inches of rain fell and took the level to 411.3′. There was flooding, but if not for the early drawdown the water level might have reached or exceeded a catastrophic 414.75′.

Mother Nature Dictates
After the 1998 flood, the state took over managing the dam and made a number of improvements in the physical plant. It also refined its operating plan so it can act quickly to adjust the water flow in response to rapidly changing weather conditions. Further improvements, including remotely controlled gates, are in the works for 2019 when the state plans a major replacement project.

The improvements are welcome and are likely to alleviate flooding to some extent. But in the final analysis, Mother Nature will still call the shots. Given that Ossipee Lake is a “bowl” with a single exit, rising water will continue to pose the questions: how high will it go, and how long will it last?