The following article was published by Ossipee Lake Alliance in 2004. It is one of a series of articles we’ll be reposting to provide context for our August 25th public meeting at which the state will detail its plan to replace the Ossipee River Dam.

Most of us are familiar with the seasonal ups and downs of the lake’s water level, yet there is still confusion about why such adjustments are needed and who manages them. A little natural history is a good starting point for an explanation.

Thousands of years ago when the glacier that covered the Lakes Region was molding the landscape, it created 73 natural lakes and ponds in the Carroll County area. Excluding Lake Winnipesauke, Ossipee Lake is the largest and Conway Lake is next. The completed project resulted in major rivers that drained the area: the Saco, which drains the northern third of the area, and the Bearcamp River-Ossipee River system that drains the remaining two thirds.

In addition, there is significant flow into Ossipee Lake from the south through the Pine River, which runs under Route 25. This natural excavation project was followed by three distinct periods of ice buildup and an eventual meltdown, called postglacial time, during which there were significant water flows through the river drainage systems. This large volume of water also moved significant quantities of sand, gravel and clay into the flow areas.

Outflow from Ossipee Lake has always been at the southeast corner of the lake, into the bays and the Ossipee River and thence through Maine before being discharged into the Atlantic Ocean. The present channel into Broad Bay is the third generation, with the first two channels having been to the southeast and flowing into Leavitt Bay.

Human Intervention
The Ossipee River channel begins a short distance to the west of the Effingham Falls Bridge where the control dams are located. The dam complex was constructed in 1919 by Central Main Power Company to manage the flow of water into the river. By raising the lake approximately 11 feet above its previous level, the utility was able to charge a fee to downstream businesses for ensuring that they would always have an adequate flow. When the market for this service dried up, they sold the dam to New Hampshire. 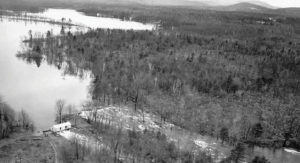 An aerial view of the Ossipee River Dam in 1953, during one of the lake’s damaging floods. As seen, the north dam is completely submerged. Alliance Photo

The north segment of the dam is made of solid concrete and has a spillway height of 405.0′ above sea level. A series of removable horizontal boards can bring the water height to 407.25′. The south segment, also made of concrete, has six gates, five of which are adjustable so that the flow can be fine-tuned to compensate for rain-induced changes in the level. Separating the two structures is a small wooded island that extends several hundred feet downstream to form an enjoyable area for hiking and fishing.

Management of the dam is a joint responsibility of the Ossipee Lake Dam Authority (OLDA), which is funded by Freedom and Ossipee, and the Dam Bureau of the NHDES Water Division. Decisions on when to open and close the gates are made by the Dam Bureau with actual work and on-site supervision provided by OLDA.

During the 1950s and 1960s the lake level was maintained at 406′ during the summer. Then, for recreational purposes it was raised to 407.5′. The State Fish and Game Department noted silting problems developing, however, so the present plan, published in 2000 by the Dam Bureau, was established. It calls for lowering the lake to 404.5′ for the winter and raising it to 407.25′ for the summer.

The reason for lowering the lake in the fall is to avoid flooding and ice damage during the winter. In the event of heavy rains and melting snow, ice conditions would not allow the dam to be opened or the top boards on  the north side to be removed safely. 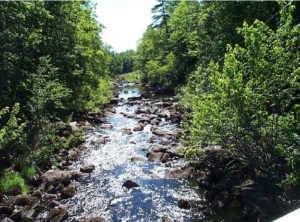 Water flows from the big lake through the bays and empties into this narrow Ossipee River channel, southeast of Berry Bay. Alliance Photo

Flood Control
The limits of human intervention are tested regularly on the lake. A case in point occurred in December, 2003 when the lake level was down and there was a thick sheet of ice. Substantial rainfall on top of heavy snow caused the water to rise to over 407 feet. The dam was open but the level remained high for several days and the ice sheet blew into dock structures and other objects along the shore.

There have been significant floods in recent times during the summers of 1969, 1976 and 1998. From June 13-15, 1998 the area received 17.48″ of rain. In a time period of three days, the lake level reached 413′ and remained at that level for several days and over the normal level for more than a week. At its peak, the flow rate was 21 times greater coming in than going out.

The Ossipee River is the only way out and flow rate is controlled by size of the channel. The state and federal government have gauges on the Bearcamp and Ossipee rivers that measure flow rate. The state has a gauge that measures the lake level near Westward Shores on the northwest end of the big lake. Readings from these gauges and predicted weather conditions are monitored by the Dam Bureau each day and are used to determine if the dam should be adjusted.

As recently as this past August [2004] the lake level was at 407.1′ and predictions were for heavy rains from two hurricanes. That morning a decision was made and action taken to open two gates on the south section. Actual rainfall amounts in the area were being monitored to determine what and when further action should be taken.

For 85 years the Ossipee River dam has played a significant role in the life of the lake, and the current state and local plan for managing the lake’s level is a good one. Even so, human intervention can only do so much. When nature decides to dump on the area, the lake level will go up and stay up until the drainage system created by the glacier can bring the level back to normal.

Bob Smart writes regularly about the lake in his “Smart Reports” series. He is retired and lives on Broad Bay in Freedom.